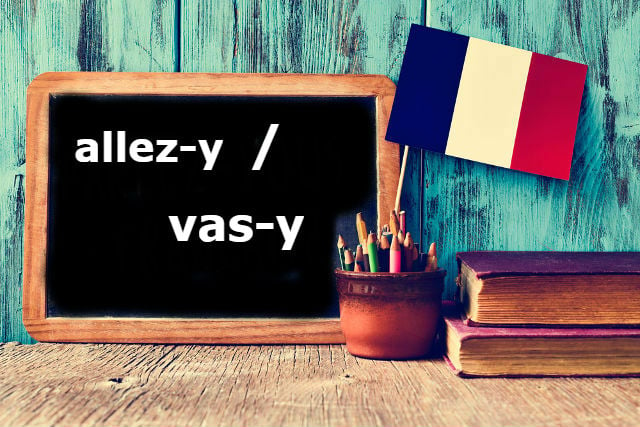 Why do I need to know what allez-y and vas-y mean?

It's hard to overstate how useful allez-y and vas-y are in colloquial French conversation.

They are a great way to make your spoken French sound more natural and native and also — once you understand what it means — you won't be left behind (literally) when someone says it you.

So, what do they mean?

Allez-y and vas-y are the polite (or plural) and informal (or singular) versions of the same expression.

You'll often hear the more polite form — allez-y — used by waiters when they're ready to take your order.

So, for example once a waiter has checked that everyone at your table is ready to order, they might say: Allez-y, je vous écoute — 'Go ahead, I'm listening'.

Also, you might say it to one of your neighbours if you're holding the lift door for them.

For example, Allez-y. Après vous. — Go ahead. After you.

Meanwhile, the more casual — or singular — form vas-y is used in exactly the same way but with young children or friends.

For example, if you are encouraging your child in a race, you might say: Vas-y, cours! — 'Go on, run!

Allez-y is the most common version you'll hear in France and is made up of the vous form of the verb aller (to go) plus y which means 'there'.

Vas-y on the other hand is made up of the tu form of the verb aller with y tacked on at the end.

When saying allez-y, you can stress the 'z' and when saying vas-y, you pronounce it vah-zee.

For more French Expressions and French Words of the Day you can CLICK HERE to see our full list.