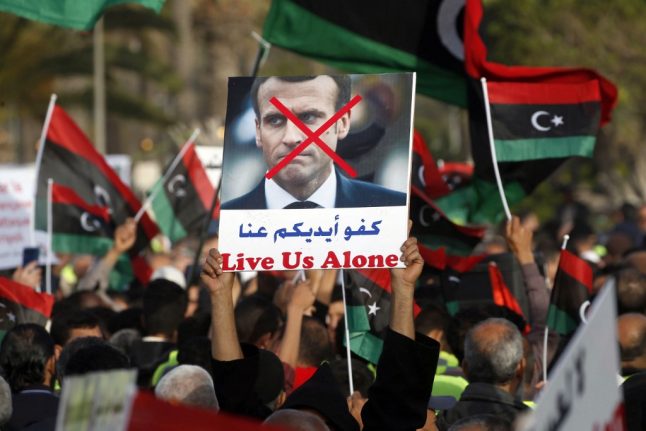 Wearing the trademark yellow vests of French anti-government demonstrators, they were among thousands of Libyans who flooded a central Tripoli square to rally in support of the internationally-recognised Government of National Accord (GNA).

“We are surprised by France's conduct in the face of the Tripoli attack,” read a sign held up by the demonstrators.

Portraits of French President Emmanuel Macron and the leaders of Egypt and Saudi Arabia were also carried by demonstrators or placed on the ground for people to trample them.

Haftar is seen by his allies — Egypt and the United Arab Emirates — as a bulwark against Islamists who have gained a foothold in Libya after the 2011 uprising that ousted and killed dictator Moamer Kadhafi.

“France says it is a friend but secretly backs those attacking our city and our homes,” added the young woman.

The French embassy in Libya on Friday tweeted — in Arabic — that Paris was “opposed to the attack” on Tripoli and urged all parties to abide by a ceasefire and engage in peace negotiations.

Khalifa Haftar's self-styled Libyan National Army (LNA), based in the country's east, launched an offensive on April 4 to take Tripoli, the western seat of the UN-recognised GNA.

Friday's rally came days after a smaller protest brought out dozens of “yellow jacket” demonstrators who on Tuesday also demanded the GNA sever ties with countries that “back aggression” on Tripoli.

It also comes a day after UN envoy Ghassan Salame warned of “a widening conflagration” in other parts of the North African country. On Thursday GNA interior minister Fathi Bach Agha lashed out at France, accusing it directly for the first time of supporting “the criminal Haftar” and saying it was cutting security ties with Paris.

“France supports the legitimate government of Prime Minister Fayez al-Sarraj and the mediation of the UN towards an inclusive political solution in Libya,” the French presidency said in a statement.

More than 200 people have been killed since the violence erupted, and more than 900 wounded, the World Health Organization said on Thursday.

More than 25,000 have been displaced, according to the International Organization for Migration.