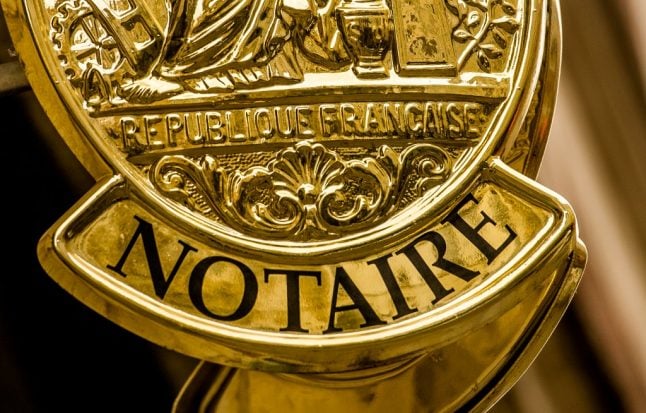 Photo: AFP
French notaires, much like a public notary, are licensed by the government to validate deeds/acts and contracts, as well as advise on certain legal matters.
The notaire profession goes back hundreds of years and they are usually there for the most important moments in life.
They act on behalf of the State and are appointed by the Minister of Justice, and if a document is drawn up by a notaire it is a guarantee of its legality and authenticity.
“The role sits somewhere between a notary and a solicitor,” Christophe Dutertre, a qualified notaire from the company France Tax Law, told The Local.
This is when you'll need to use them.
1. When buying (or selling a property)

Unlike in other countries where having lawyers involved is merely advisable, buying property cannot be done in France without a notaire.

As a buyer, you are free to appoint one of your choice, although estate agents and buyers often have their own.

The notaire – unlike a conveyancing solicitor or lawyer – does not act on your behalf, he or she is simply there to make the signing of the contracts and registering of deeds a legal process.

READ ALSO: Ten things to think about when buying property in France You are obliged to use the services of a notaire if you decide to draw up a marriage contract and they can also act as advisers when drawing the contract up.

If there is a marital contract – sometimes referred to as a prenuptial agreement – the notaire provides a Certificat du notaire or Attestation du notaire which confirms the contract's existence.

This certificate must have been drawn up no more than two months prior to the marriage and is submitted to the Town Hall.

These agreements are more common in France due to the country's laws on property division during divorce.

3. Drawing up a will

You don't officially need a notaire to draw up a will but it's a good idea.

A notarised will is prepared in the presence of two witnesses or a second notaire and signed by the client.

While it isn't absolutely necessary to do it this way, as a foreigner in France it is probably the best way because it will allow the notaire to explain some specifics about French inheritance law, which is highly regulated and very different to the UK and the USA.

'Don't wait to make the will': What you should know about French inheritance laws Notaires have a monopoly over the French land registry, meaning that if you need to transfer the deeds of a property because you are giving one away then a notaire will need to register the change on your behalf.

Any transfer of property – whether for money, in part-exchange or as a gift – is not legally recognised until the change has been lodged at the land registry.

5. The settlement of an estate after death

Again, French notaires are almost always involved in the settlement of an estate because of their monopoly over the French land registry. If your inheritance involves any property you will need them to register the change of ownership before it becomes legally yours.

While it is not necessary to consult a French notaire when adopting a child, you can enlist them to advise you.

In order to adopt in France, it must be made official by an order from the regional court known as a tribunal de grande instance. The tribunal is open to all and legal advice is not a requirement, but the process can be a complex one so it is helpful to have some advice.

The PACS (pacte civil de solidarité or 'civil union'), which only exists in France, was introduced back in 1999 as a way of giving same-sex couples similar rights and benefits to those given to married couples. It has tax benefits, but also some significant differences to civil partnerships in other countries, the main one being that it is much easier to dissolve a PACS.

Registering for a PACS can be done with a registrar, but a notaire can also officially notorise the document, and can also give you advice on the rights that a PACS gives you.

What you need to know about PACS v marriage in France

Again, this is not obligatory by law but if you wish French notaires can advise you on how to protect any vulnerable family members.

French law provides various ways of protecting the elderly, the sick and the disabled and a notaire will be familiar with how to do this.
You can find a directory of French notaires here.