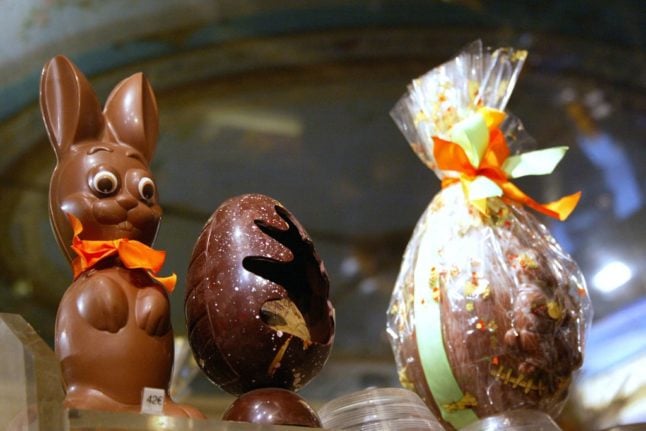 Easter holidays are traditionally a time for families to gather and eat chocolate – but the four-day weekend is a tradition that only one part of France gets to enjoy.

It’s always been something of a puzzle why a country that gives workers the day off for Annunciation, Assumption and All Saints, among others, doesn’t have a holiday for Good Friday – the Friday before Easter.

And it’s even more weird when you consider that in some parts of the country it is actually a holiday.

The tradition of treating the Friday before Easter as a normal work day didn’t start until 1905 when the country officially became secular, dividing the Church from the state.

From then on, unlike the rest of Europe, French workers have been forced to treat Good Friday, called Vendredi Saint in French, as a day just like any other. Much to the envy of most workers in France, those living in the eastern Alsace area, now part of the Grand Est region, do get a day off on Good Friday.

And the reason for this is Alsace’s rather complicated history of switching hands between Germany and France.

In 1871 Germany seized Alsace including most of the departments of Bas-Rhin, Haut-Rhin as well as most the department of Moselle in the region of Lorraine.

The territory wasn’t returned to France until the end of the First World War in 1918.

At that point citizens of the territory weren’t exactly thrilled at the idea of losing the day off and simply refused to give it up…perhaps demonstrating a French side to their natures which hadn’t been lost during all those the years of German rule.

Their demands were met and the piece of legislation which makes the region an exception, known as the Concordat of Alsace-Moselle, sealed the deal.

And in fact, it is for this same reason that this region gets St.Stephen’s Day, also known as Boxing Day, as a day off like many other European countries.  Those living in the rest of France however have to return to work the day after Christmas.

Perhaps unsurprisingly there have been regular challenges to the Concordat, with many arguing that the region should have the same rules as the rest of the country.

Although as Eric Sander, local law expert in the Grand Est capital Strasbourg, pointed out to France Bleu, there are unlikely to be any politicians willing to fight that particular battle.

So following that logic, Easter Monday is presumably a normal day in France too?

No, actually Easter Monday is a public holiday.

And it’s unique in the French holiday calendar in that it’s the only day off where there isn’t either a national event or a Christian festival (although it’s obviously linked to Easter, the main day in the Christian calendar is Sunday, when Jesus rose again after being crucified).

It was Napoleon who made this a public holiday back in 1802 when he trimmed down the 50 or so public holidays that the French celebrated at the time.

So why didn’t Easter Monday get the chop along with Good Friday in 1905?

Let’s get one thing clear – some French people are very, very sexy. Others are about as appealing as completing your French tax declaration. And the same can be said for all nations – so how did the anglophone world come to believe that all French people are innately stylish, beautiful and seductive?

In the anglophone world, the cliché about the French is that they are uniquely stylish and beautiful, sexually liberated and very interested in the world of love and romance.

In the case of French women they are alluring but aloof while Frenchmen – we are led to believe – are charming but faithless, always on the lookout for the next potential conquest and, of course, superb in bed.

While people like this probably exist, it’s far from the norm and yet this stereotype is remarkably enduring.

We asked Emile Chabal, a Reader in History at the University of Edinburgh and a specialist in European political and intellectual life of the 20th century, to explain more.

He told us: “Traditionally, and I think certainly in the 20th century, the dominant ideal of romance and style that has come out of France has involved beautifully cut clothes, elegant interactions between very eloquent people and a society that is very free in terms of interactions between men and women.

“And all of these stereotypes come together to form an image of the French as a particularly romantic people and France as the home of love.

“And I think these stereotypes in many ways are wrong – France in the 20th century is a very conservative society, gender roles are really quite strictly policed and France is of course a Catholic country, so that has imposed strict roles on men and women and how they can interact.

“But I think a combination of French cinema, French music and prominent women in French intellectual life, such as Simone de Beauvoir, all add up to create an idea of France as a country that is particularly open and free, especially in the domain of love and sex.”

So when did the anglophone world start to believe that the French have a hotline to love?

Emile said: “From at least the 15th and 16th century the French are known in Europe for being stylish and fashionable in terms of clothing. But to my mind it’s not until the 20th century that the association with France and sexiness is really cemented.

“What happens is that the French succeed in packaging and selling a certain type of ‘Frenchness’ to foreigners, and this works particularly on Americans, and a major source of this stereotype comes from America.”

Yes, anyone who believes that this is purely to do with self-evident French sexiness might be disappointed – the ‘French style’ stereotype was deliberately packaged and sold by marketing companies, artists and even the French government.

Over the decades this French ideal has been used to sell everything from fashion and perfume to holidays and mid-range family cars (such as Papa and Nicole in the below advert).

Emile said: “The domain of fashion is really important – haute couture is a very conscious branding of Frenchness. The way that fashion houses like Dior and Yves Saint Laurent – which were subsidised by the State – become global is really tied up with French attempts to develop this as a soft power – at a time when France’s ‘hard power’ – that is, military power – is under question after World War II, decolonisation, the formation of the European union.

“From 1960s onwards the French state starts to subsidise culture in a very direct way, whether that’s subsidies for film, fashion events etc. It’s not an accident that certain people are being given a global platform to market an idea of French style.”

And perhaps the art form that created the most enduring images of the French of moody, romantic and sexually liberated was the cinema of the French New Wave.

“I think the French New Wave cinema has a lot to answer for – fashion and style becomes embedded in the way that foreigners see French intellectual life – they see a way of being cultured in France that also involves style – smoking cigarettes wearing fashionable shoes and clothes etc.

Speaking of Americans, it was in the US that the ‘romantic Frenchie’ stereotype first really took off in the period after World War II.

The US remains a huge market for France, particularly in the realm of tourism.

Emile said: “The British relationship with the French is of course much much older, but it’s a complicated relationship with a lot of history of conflict. Even in the period after World War II British politics tend to define itself in opposition to the French – we are not a land of revolution, of protest we are a land of consensus, parliamentary politics and this is important in terms of how the British see themselves as a global power.

“The American view is more about individual exchanges and there were two groups who were really influential here.

“The first is the well-off white American women – WASPS – who came to France on holidays or cultural exchanges or to study – think Jackie Kennedy.

“And although these type of women were really tiny in number they went on to become extremely influential in setting a certain romantic image of the French.

“The second group were African-Americans who came to France, particularly in the period after World War II, in search of a society that was more open to them, and then reported back that France was a sort of paradise of freedom – I’m thinking people like Miles Davies touring in France and then saying “They respect me for who I am”.

“People came and continue to come in their millions to experience ‘Frenchness’,” said Emile.

“The packaging of France to the outside world leans very heavily on Paris – in contrast to marketing within France which centres on going to the mountains, the coast, the countryside and discovering new parts of the country. Paris is marketed to tourists, especially tourists from South Asia, China and the Gulf, as the home of luxury, fashion and romance.”

And if you want proof, check out this promotional video made by Paris City Hall in 2016 with the intention of luring tourists back to the city when visitor numbers fell after the 2015 terror attacks. The film begins, of course, with two attractive people in bed – the tagline isn’t quite ‘come to Paris and get laid’ but it’s not far off.

The classic stereotype still stands, but there has been a sustained backlash a lot of which has emanated from the French themselves – especially Frenchwomen who resent the narrow, restrictive stereotypes of the ‘French woman’, which really only ever encompassed a small group of wealthy, white, Parisian women.

Emile said: “There have been a number of high profile scandals among the intellectual elite involving paedophilia and incest, feminist groups are questioning this image of the ‘French woman’ and the gender roles that implies and there is an increasing focus on Black beauty as the ‘beautiful French woman’ stereotypes especially are overwhelmingly white.

“There’s also an evolution of style so that it encompasses more groups – it used to be that the French were stylish and the British eccentric so that if you didn’t want to dress in the traditional way in France you would go to Britain where people would tolerate you wearing weird things and that was great.

“That has affected this ability to market ‘French style ‘as universal. France has a long and contested history of trying to find a place for Black people and the questions are now being asked about whether these traditional styles work with Black bodies or Black hair and I think those have challenged the hegemony of French style.”

But the stereotype is powerful and even though it is being questioned in France, it might take a long time to change preconceptions outside the country.