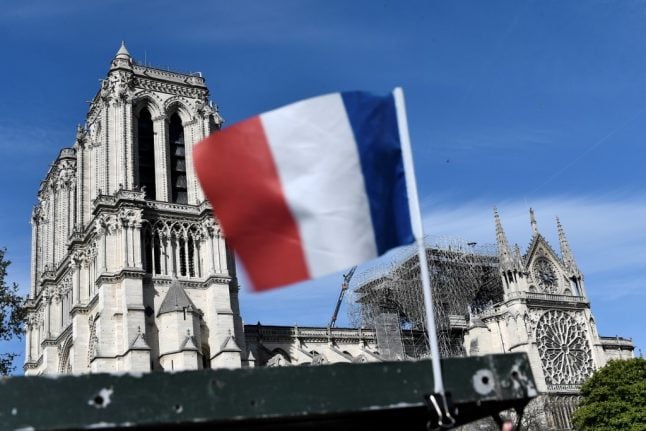 Only until the weekend  – if the more hot-headed Gilet Jaunes and their ultra-leftist allies are to believed.

Some, not all, yellow vests are pushing ahead with plans for a so-called “Ultimatum Two”, a large and probably violent protest in the French capital on Satutrday five days after Notre Dame burned.

In his brief national address on Tuesday evening, President Emmanuel Macron said that the “tumult” of politics should be set aside while the nation grieved for the 850 years old lady disfigured, but finally spared, by Monday’s apocalyptic blaze.

Macron's speech called for politics to be set aside while the nation grieved. Photo: AFP

Macron could not prevent himself, all the same, from making several, pointed, political remarks, aimed at the French people but mostly aimed at the Gilets Jaunes.

“What we saw in France that night was our capacity to conquer when united”, he said. “The fire in Notre Dame is a reminder that our history never ends… Even those things that we believed to be indestructible can be threatened… France is a living thing but all living things are fragile.”

In other words, those who want to pull down democratic institutions, however flawed, should think before they destroy the work of centuries.

Put more crudely, President Macron hopes that a doubtless ephemeral sense of national unity-in-grief will help to sweep away what remains of the Yellow Vest rebellion.

At 8pm on Monday, as the fire spread through the ancient oak timbers in the cathedral’s roof, Macron was scheduled to make the most important television speech of his presidency. He had already recorded the address but he cancelled the broadcast. Macron and his wife Brigitte rushed to the scene of the fire on Monday night. Photo: AFP

Much of what he intended to say has since leaked in the French press. If the leaks are to be believed, the speech was to have been surprisingly radical.

Brief recap: this was Macron’s response to the Great National Debate which he launched in January to answer, or distract from, the demands of the Gilets Jaunes.

Although dismissed by many at the time as a joke, the nationwide debate has been a huge success. There have been 13,000 public meetings and over 3,000,000 contributions, by internet or by post or in grievance books opened in town halls all over the country.

The great danger was that the elephant would give birth to a mouse. Macron’s advisers and ministers in the Edouard Philippe government have been divided for weeks into “react” and “ignore” camps

Some thought that Macron should declare the debate a triumph and then say that it proved the need for the state-shrinking reforms that he intended to make anyway. This was broadly what Prime Minister Edouard Philippe said last week.

Others wanted him to make clear concessions to the anger and frustration in Peripheral France revealed by the Yellow Vest movement. If the leaks prove correct – and they have not been denied – Macron has gone for this second option.

The speech, likely to be broadcast next week, commits Macron to “a redefinition of our national project”. Some of the promises are definite, others more conditional.

In brief, Macron pledges to reduce income tax from next January, probably for low and medium earners only. He plans to boost smaller pensions by reintroducing an inflation link that he abolished in 2017. He even hints at the possibility that he might restore the capital wealth tax (ISF) that he abolished that year.

He commits himself to freeze all closure of rural schools and hospitals until the end of his term in 2021. The fire has seen an outpouring of grief that has, however briefly, united the nation. Photo: AFP

The President promises fewer MPs in the national assembly with a section elected by Proportional Representation. He bows somewhat to the Yellow Vest demands for direct grass roots democracy by simplifying the rules for national referenda and proposing popular-initiative referenda– a Gilet Jaune obsession – for local decision-making only.

He suggests the creation of a 300-strong “citizen’s assembly”, selected at random, to consider these and other constitutional changes. (This is borrowed from an idea already successfully used in Ireland).

He also speaks somewhat vaguely of abolishing the Ecole Nationale d’Adminsistration (ENA), the finishing school for the governing classes that is accused of creating a chasm between “ordinary people” and “the elite.”

The most militant Gilets Jaunes will reject such stuff as inadequate. They believe, in theory, in a destruction of all representative institutions and the creation of a grass-roots, on-line direct democracy.

In truth, for some of them, the weekly protests have become a  way of life. We protest and therefore we are. As for the Black Bloc guerrillas – and some Gilets Jaunes  – they want nothing less than the destruction of capitalism.

The remaining moderate GJ activists may be pleasantly surprised that Macron has gone so far. His proposals seem to have been crafted to melt a much-reduced movement to its hard core.

Argument rages in the French press on whether Macron has leaked the speech deliberately or whether he is furious that it has been disclosed.

Personally, I believe that it was leaked. Macron wanted to increase the pressure on the Gilets Jaunes before Act 23, or the 23rd consecutive Saturday putsch, this weekend.

Recent turnout has been low. But the harder nuts in the movement have been planning for weeks to bus large numbers to Paris on Easter Saturday to repeat the events of “Ultimatum One” on March 16th. That, remember, was that day that five news kiosks and a posh restaurant were burned on the Champs Elysées.

A few days after the great fire at Notre Dame, can the Yellow Vests really go ahead with a mass protest in Paris which is likely, on past form, to turn violent?

Some wise voices in the movement are calling for the protest to be cancelled. Others are insisting that it must go ahead. There is even abusrd conspiratorial talk on some GJ websites of the Notre Dame fire being “suspiciously” timed to help Macron.

If there is violence in Paris on Saturday, it will destroy much of the already-waning national sympathy for the Yellow Vests. If there is anyone thinking seriously at the head of this supposedly leaderless movement, they should cancel “Ultimatum 2”.

Will they? Most thinking Gilets Jaunes “leaders” have been pushed out or marginalised long ago. 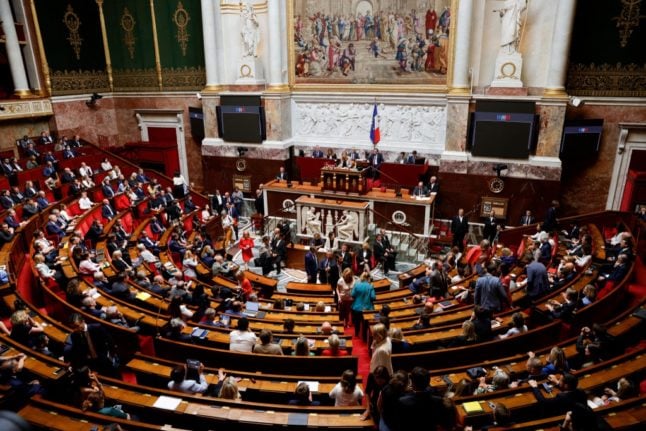