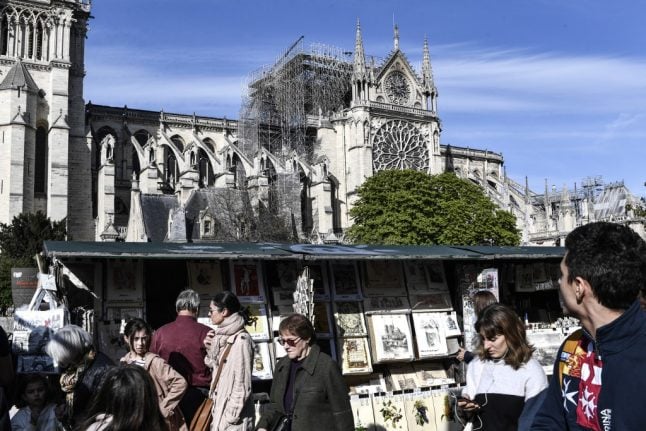 France's culture minister pleaded Thursday for an end to the controversy over the 850 million euros (950 million dollars) pledged to restore Notre-Dame cathedral, which critics have suggested would be better spent on the poor.

Some of France's biggest companies and billionaires, including luxury goods tycoons Francois-Henri Pinault and Bernard Arnault, have pledged amounts of 100 million euros or more to rebuild the landmark after it was gutted by fire on Monday evening.

The vast sums have drawn fire in a country where wealth inequality and the plight of the low-income households have been highlighted during five months of demonstrations by “yellow vest” protesters.

“This pointless debate consists of saying 'it's too much money for Notre-Dame even though there are needs elsewhere' — of course there's a need for money for the social system, for health, the fight against climate change,” Culture Minister Franck Riester told RMC radio. “But let's leave this extraordinary show of generosity to run its course,” he pleaded.

He said Notre-Dame was “not only old stones. It's a part of our identity, it's our nation, European culture.”

The controversy has undercut hopes expressed by President Emmanuel Macron for the divided country to “come together” in the wake of the fire, which is widely suspected to have been caused by renovation work underway on its steeple.

“It's very disturbing to see how in France you get criticised even when you do something,” Arnault said on Thursday at a shareholder's meeting when asked about the row.

Some leftist politicians have argued that the ultra-rich donors could best help protect the country's cultural heritage by fully paying their taxes — or helping the “human cathedral” of people in need.

“In one click, 200 million, 100 million. That shows the inequality which we regularly denounce in this country,” the head of the CGT trade union, Philippe Martinez, said on Wednesday.

“If they can give tens of millions to rebuild Notre-Dame, then they should stop telling us there is no money to help with the social emergency (in France),” he added.

The huge tax breaks available on the donations also caused some unease, prompting Pinault to announce he would forfeit the rebate on his contribution. Sweden's teenage climate change activist Greta Thunberg also used the drama at Notre-Dame to underline her message that the environment should be the biggest priority.

“Notre Dame will be rebuilt, I hope its foundations are strong, I hope that our foundations are even stronger, but I fear they are not,” she told the European parliament on Tuesday, referring to the fight against climate change.

Writer and historian Mike Stuchbery, writing on the Huffington Post, reminded donors of their responsibility to the poor.

“It's important for some to remember that such a wonderful edifice was built to celebrate a faith that emphasises giving aid and comfort to the poor, regardless of who they are,” he said.

In Britain, a satirical online article went viral after it compared the reaction to the Notre-Dame disaster and the fatal fire at London's Grenfell towerblock in 2017 in which 71 people lost their lives.

“Former Grenfell residents have expressed regret that they didn't splash out on pretty stained glass windows before their tower burned down,” said the post on newsthump.com.