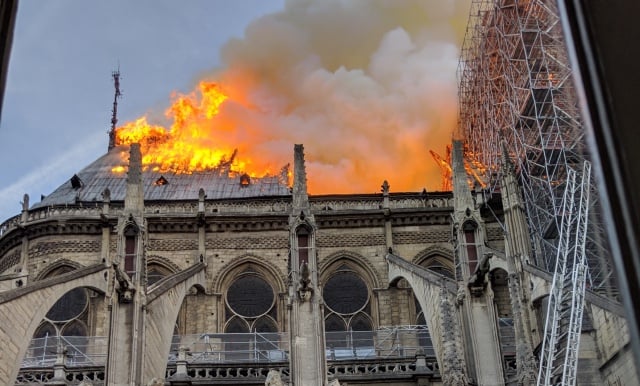 The photos Quinn took of the burning cathedral

The first thing Quinn, a 37-year-old American national, knew that something was awry was when she noticed a red glow being reflected in the windows of her apartment, directly opposite the historic cathedral.

“The beginning was frightening. I could hear these yells from the street, but when you live in central Paris you get used to that kind of noise. I could also smell something strange, but didn't realise what it was.
“Then I saw this red glow reflected in the window and I just ran outside and saw the fire.
Quinn and her flatmates watched in shock as the flames took hold of one of France's most famous monuments, just yards away.
“We could see the stones and debris falling from the roof, but they fell inside not on the street. You could feel the windows of our apartment getting warmer and warmer. We grabbed towels and soaked them to prevent the fumes coming in,” she said.
She took a quick video to show her husband and it reveals her shock as he looked up to see the flames raging through the famous cathedral almost directly above her. The spire collapsed minutes later.

Three days after the devastating blaze, Quinn (the American resident of Paris who shot these videos) is unable to return to her apartment building directly opposite Notre-Dame, considered too dangerous. pic.twitter.com/LVnDWNJ068 “I could see the spire burning and turned away for a moment and when I looked back, it was gone,” she said.
It wasn't long until firefighters arrived and decided the apartment building on Rue du Cloître-Notre-Dame in Île de la Cité had to be evacuated.
Quinn, who has just finished studying and has only been in Paris for around one month, was able to grab some money and her passport, while a flatmate only had time to grab pyjamas. They were escorted out of the building by the pompiers (firefighters) and then by the police to the security cordon where hundreds of people had amassed to watch the drama and tragedy unfold.
“It felt like we had minutes to grab what we could,” she said.
“We were escorted down this quiet street and then we got to the cordon and there was so many people there. It was very intense,” said Quinn. “There was traffic chaos outside the cordon. We tried to get a taxi for an 88-year-old Parisian lady who only had time to grab her dog and her walking cane but the taxi driver refused to take the dog. We explained that she was 88 years old and had just been evacuated from the apartment because of the fire, but the taxi driver just refused and drove off.
“The atmosphere was surreal. There were so many people on the streets around the area. It felt like New Year's Eve. People were drinking and it almost felt like a party.”
Three days after the fire and Quinn and her flatmates are still not allowed to return to their apartment. The reason given by officials at Paris City Hall is that it the apartment buildings on Rue de Clôitre are considered still too dangerous.

Videos taken by Quinn, a 37-year-old American resident of Paris who was forced to leave her apartment when the fire broke out at Notre-Dame Cathedral. She watched in shock as the blaze took hold of the historic cathedral before being given minutes to grab her things and get out. pic.twitter.com/OTqatdCmy6

Other neighbours of Notre-Dame who were evacuated on Monday evening have been allowed back in to their homes either to collect belongings or to return to live.
While the structure of Notre-Dame Cathedral was considered to have been saved by heroic firefighters, investigators are still examining if there are any weaknesses.
Quinn and her flatmates have had to stay with friends but have now been offered hotel rooms by the Mairie de Paris (city hall). Like many who live in Paris, her one regret is that she didn't visit Notre-Dame more often.
“It was amazing living across the street from the cathedral. Not everyone in Paris gets to experience that,” she said.
French president Emmanuel Macron has vowed the cathedral will be rebuilt in five years, but experts believe it could take a decade to restore Notre-Dame to its former glory.
“It was incredible just to be able to look out at it each day through the windows. But we never went inside enough. We kept saying we must visit it, but never did.”