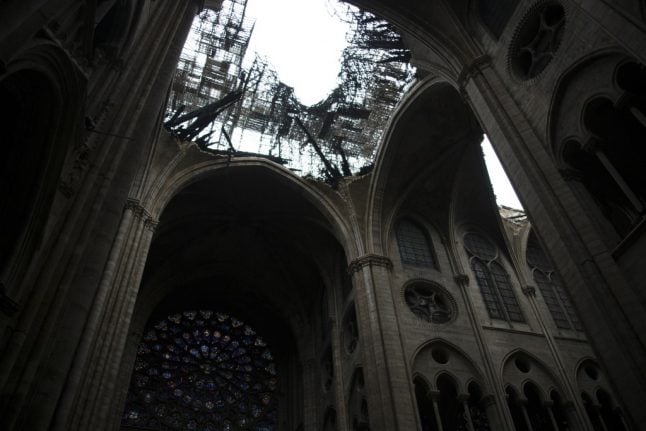 In just five years, Paris will be hosting the Olympic games and the city was obviously hoping to look its best for the event.

And a freshly rebuilt Notre-Dame cathedral will be the centrepiece of that, if French president Emmanuel Macron has his way.

Addressing the nation, in the aftermath of the blaze, Macron rashly committed himself to a timescale of five years.

“We will rebuild the cathedral even more beautifully and I want it to be finished within five years,” Macron said in a televised address to the nation a day after the blaze. “And we can do it.” Macron during his TV address to the nation. Photo AFP

Who believes that the project can be finished in five years?

Macron has committed himself to the timetable, although he was careful to add: “Let us not fall into the trap of haste.”

Paris mayor Anne Hidalgo has also thrown her weight behind the five year deadline, telling reporters: “I would like the cathedral to be able to welcome the world in 2024, since in 2024 Paris will welcome the world.”

Meanwhile former culture minister Jack Lang told reporters: “Since yesterday I've been hearing that it will take a decade. That's a joke.”

Pointing to the renovations in Strasbourg, he said: “We have to do the same thing here, not in 10-15 years but three years.”

The stakes were raised by the International Olympic Committee, which on Thursday pledged €500,000 to help ensure Notre-Dame is restored in time for the 2024 Paris Games.

“The aim of completing the reconstruction in time for Paris 2024 will be an extra motivation for all of us,” IOC president Thomas Bach told 2024 Games chief Thomas Estanguet in a letter.

“All the Olympic movement and in particular the IOC have been extremely touched by the instantaneous connection the French have made between Notre-Dame cathedral and the Paris 2024 Olympic Games,” he wrote.

Estanguet said the Olympic family “wanted to show its solidarity with Parisians and all French people”. And who thinks it is impossible?

Jack Lang cited the recent renovations at Strasbourg Cathedral as an inspiration, but the man behind that resoration project has predicted that Notre-Dame will take much longer.

Eric Fischer, head of the foundation in charge of restoring the 1,000-year-old Strasbourg cathedral, which recently underwent a three-year face lift, said: “I'd say decades.”

“The damage will be significant. But we are lucky in France to still have a network of excellent heritage restoration companies, whether small-time artisans or bigger groups,” he told AFP

Fischer said the ability to rebuild the colossal cathedral in a manner that respects its original form and character would depend on the plans, diagrams and other materials available to the architects.

They would need “a maximum of historical data or more recent data gathered with modern technology such as 3D scans” of the kind used in the restoration of the Strasbourg cathedral, he said.

Stephane Bern, a TV presenter famous for his programmes on medieval France who was recently appointed the government's representative on heritage, estimated the rebuilding would take “10 to 20 years minimum”.

Meanwhile French national heritage body Sites & Monuments sent a rather waspish tweet in which it accused both Macron and Hidalgo of “indecency” in trying to fit the Notre-Dame restoration into the Olympics timetable, lamenting it as a “sign of the times”.

Ultimately only time will tell, although fundraising efforts have got off to a flying start, with the official total already over €850 million.