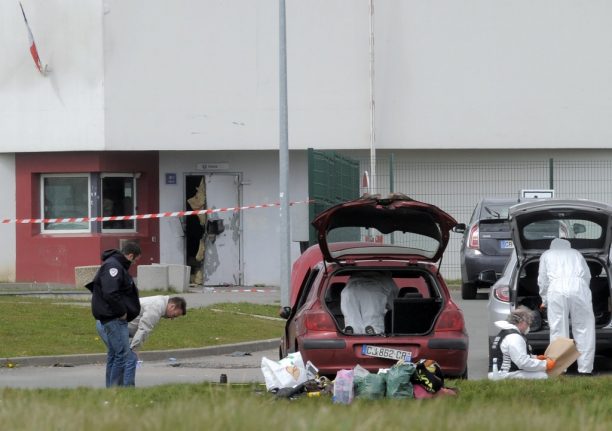 Police at the scene after the daring escape in 2013. Photo: AFP

Investigators have discovered that the young woman in her 30s had been writing letters to Redoine Faid, the source said.

This lasted “two to three years” before being interrupted in 2016, which has intrigued the judicial police investigators in Versailles and from the central anti-criminal office, the source added.

READ ALSO The astonishing life of France's most notorious gangster Police want to shed light on the role of all involved, especially that of the pilot who up to now was seen as a victim, a hostage of Faid's accomplices.

Faid, 46, was recaptured north of Paris in October after three months on the run at times wearing as a disguise a burqa, a loose garment worn by some Muslim women which covers the entire face except the eyes.

His brazen escape took place on July 1 when two heavily armed accomplices used smoke bombs and angle grinders to break through doors and whisk him to a waiting helicopter at the prison in Reau, 50 kilometres southeast of Paris.

Two men posing as flight school students, who had already taken an introductory flight, were said at the time to have forced a helicopter instructor at gunpoint to fly them to the jail.

The pilot landed in the courtyard – the only part of the prison not fitted with anti-helicopter nets – prompting a heated debate in France about whether the country's prisons are secure enough.

The helicopter was later found partially burnt in the Paris region with the pilot in a state of shock and having been beaten up.

Faid had been serving a 25-year term over a botched 2010 heist in which a policewoman was killed, though he claims her death was accidental.

The career criminal with multiple convictions for armed robbery had escaped from prison once before, for six weeks in 2013.

He has cited movie baddies such as Tony Montana in “Scarface” as an inspiration and said he discovered his “calling” at the age of 12.