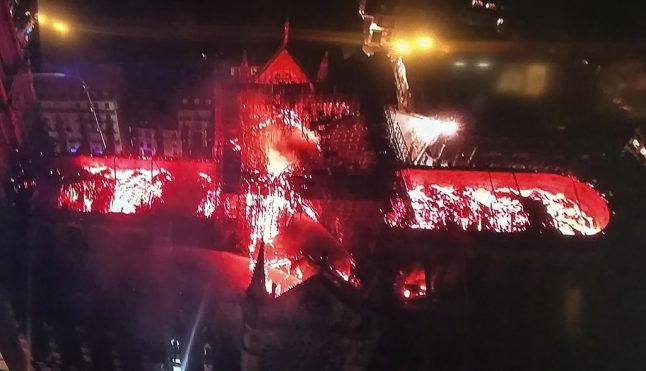 Fire investigators will use drone footage to map the spread of the flames. Photo: AFP

Could it have been arson?

No. Fire investigators have been quick to rule out arson as the cause of the blaze and say that all indications are that the fire started by accident.

Public prosecutor Remy Heitz told reporters: “Nothing suggests that it was a voluntary act.” Investigators and engineers have been on the scene Photo AFP

Where did it start?

The seat of the fire has now been established as the base of the steeple. The blaze then quickly spread through the wooden roof until it completely engulfed the spire, which came crashing down to gasps of horror from onlookers.

The spire had been the centre of long-running restoration work on the cathedral. It was being strengthened because the lead on the base had thinned over time, making the structure more fragile.

As part of the works, elevators had been installed to the roof, and investigators will be examining all electrics in the area to see if an electrical fault started the blaze. The first flames were spotted by two security guards, but by that point the flames were already several metres high.

There have been reports that one of the cathedral fire alarms had gone off earlier, but in a different section of the building. This is one strand that investigators will be looking in to.

How is the investigation progressing?

Fire investigators have focused on the restoration work being carried out and have already spoken to more than 30 people from five different construction companies. Twelve people were spoken to on the night of the fire, and a further 20 have been spoken to since.

Over the coming days they will be using drones to take aerial photos to try and establish exactly how the fire spread.

Prosecutor Remy Heitz has said the investigation promises to be “long and complex” and has assigned 50 investigators to work on it.