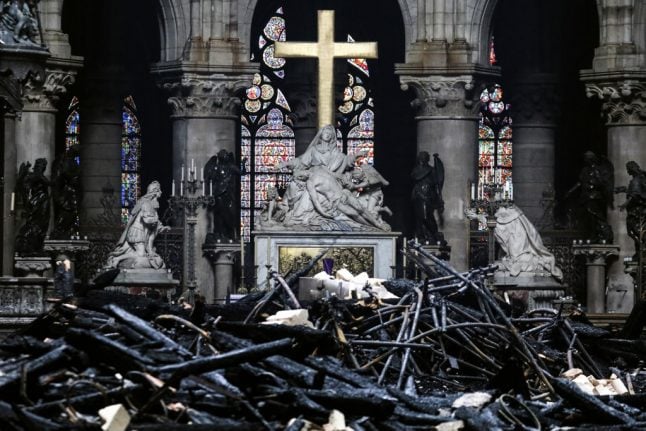 The twisted ans blackened wreckage on the roof of Notre-Dame. All photos: AFP

Images from inside the cathedral showed its immense walls standing proud, with statues still in place and a gleaming golden cross above the altar.

However the floor was covered in charred rubble from the fallen roof and water while parts of the vaulting at the top of the cathedral had collapsed. Junior interior minister Laurent Nunez told reporters at the scene that work to secure the structure would continue into Thursday, allowing firefighters access to remove remaining artefacts and artworks. He said the building had been saved within a critical time window of 15-30 minutes by a team of 400 firefighters who worked flat out through the night. Though “some weaknesses” in the 850-year-old structure had been identified, overall it is “holding up OK”, he added. Renovation work on the steeple, where workers were replacing its lead covering, is widely suspected to have caused the inferno. “Nothing indicates this was a deliberate act,” Heitz told reporters, adding that 50 investigators had been assigned to what he expected to be a “long and complex” case.