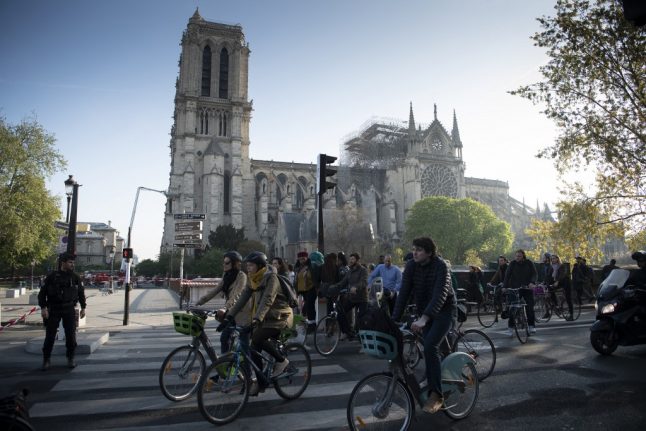 What will replace the gap where the spire once stood? Photo: AFP

Prime Minister Edouard Philippe said the contest would decide whether the monument should have a new spire at all and if so, whether it should be identical to the fallen 19th-century model or be a wholly new design.

The world looked on in horror Monday as flames engulfed the 850-year-old gothic masterpiece seen as encapsulating the soul of Paris and the spire came crashing down. Construction work was ongoing on Wednesday to make the site safe. Photo: AFP

Explaining that having no new spire at all was an option, Philippe noted that Notre-Dame had been without a steeple for part of its history.

Philippe described the task of rebuilding it as “a huge challenge and historic responsibility”, a day after President Emmanuel Macron said the  entire restoration should be completed in just five years.

Macron had vowed to rebuild the iconic monument by 2024 when France hosts the summer Olympics.

“We can do it,” he said Tuesday, calling France “a nation of builders.”

On Wednesday afternoon, he was set to chair a meeting of senior government, church, conservation and Paris city officials to launch the reconstruction process.

No sooner had firefighters extinguished the flames than pledges of donations towards restoring France's best-loved monument, which attracted 12 million visitors in 2018, began to pour in. The blazing spire collapsed shortly after this picture was taken. Photo: AFP

Within 24 hours, the pledges had reached more than €800 million, with French business magnates and corporations jostling to outshine each other with displays of generosity.

But the slew of announcements raised eyebrows in France, with some leftist politicians arguing that the ultra-rich could best help protect the country's cultural heritage by fully paying their taxes – or helping the “human cathedral” of people in need.

The huge tax breaks available on the donations also caused some unease, prompting Francois-Henri Pinault, the billionaire CEO of the Kering luxury goods empire, to announce he would forfeit his rebate.

“The donation for Notre-Dame of Paris will not be the object of any tax deduction. Indeed, the Pinault family considers that it is out of the question to make French taxpayers shoulder the burden,” Pinault said in a statement.

Pinault had led the pledges of donations starting Monday night with a promise of €100 million.

Billionaire Bernard Arnault and his LVMH luxury conglomerate, Total oil company and cosmetics giant L'Oreal also each pledged €100 million or more, while US tech giant Apple said it would give an unspecified amount.

French corporations are eligible for a 60-percent tax rebate on cultural donations.

The government said on Wednesday that figure would remain unchanged, but increased the rebate to 75 percent on individual donations for Notre-Dame of up to €1,000.