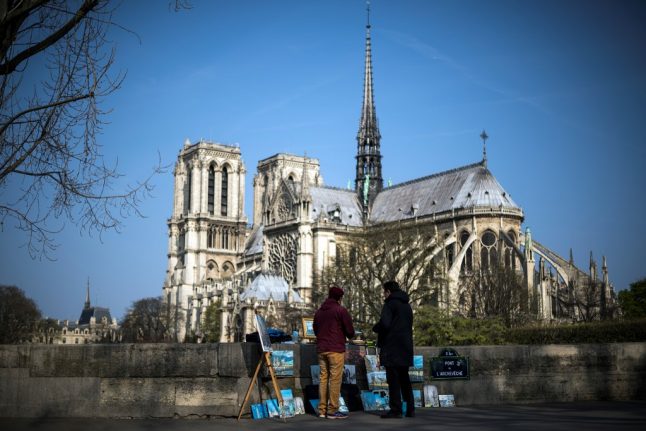 Experts believe it will take decades to restore Notre-Dame to its former glory. Photo: AFP

But experts on Tuesday warned that it would likely to take decades to restore the cathedral to its former glory.

Asked how long the restoration could take, Eric Fischer, head of the foundation in charge of restoring the 1,000-year-old Strasbourg cathedral, which recently underwent a three-year facelift, said: “I'd say decades.” “The damage will be significant. But we are lucky in France to still have a network of excellent heritage restoration companies, whether small-time artisans or bigger groups,” he told AFP

Fischer said the ability to rebuild the colossal cathedral in a manner that respects its original form and character would depend on the plans, diagrams and other materials available to the architects.

They would need “a maximum of historical data or more recent data gathered with modern technology such as 3D scans” of the kind used in the restoration of the Strasbourg cathedral, he said.

Stephane Bern, a TV presenter famous for his programmes on mediaeval France who was recently appointed the government's representative on heritage, estimated the rebuilding would take “10 to 20 years minimum”.

Noting the restoration of Reims cathedral which was bombarded by German forces during World War I took decades, an emotional Bern, 55, told French radio: “You know what hurts me the most? It's the idea that I will not see it again in my lifetime.”

“It will be rebuilt for future generations,” he said. Even as hundreds of firefighters tackled the mammoth blaze that ripped through France's most famous cathedral on Monday, a visibly emotional President Emmanuel Macron announced that “we will rebuild Notre-Dame together”.

Macron announced a fund would be set up for donations, but even before the fund went live people and institutions from France and across the world were pledging to donate millions of euros so the cathedral and its famous spire can be rebuilt.

The French government wasted no time with ministers meeting on Tuesday morning to thrash out a “reconstruction plan”.

But Paris will not just be in need of donations to restore their much-loved monument.

Specialised craftsmen and rare materials are also expected to be needed to restore the monument, which welcomes more than 13 million visitors each year – an average of more than 35,000 people a day.

Blanquer said France would mobilise the world of expert teaching and ancestral knowledge to meet this “new French challenge”.

The head of a French lumber company told FranceInfo radio that it was ready to offer the best oak beams available to rebuild the intricate lattice that supported the now-destroyed roof, known as the “Forest”.

“The work will surely take years, decades even, but it will require thousands of cubic metres of wood. We'll have to find the best specimens, with large diameters,” Sylvain Charlois of the Charlois group in Murlin, central France, told the radio station.

The United Nations' Paris-based cultural agency UNESCO has also promised to stand “at France's side” to restore the site, which it declared a world heritage site in 1991.

“We are already in contact with experts and ready to dispatch an urgent mission to evaluate the damage, save what can be saved and start elaborating on measures for the short- and medium-term,” UNESCO's secretary general Audrey Azoulay said in a statement Tuesday.

The painstaking renovation work is likely to cost hundreds of millions of euros over many years, though experts breathed sighs of relief that the damage was not even worse.

The gothic edifice had been undergoing an €11 million overhaul financed by the French state to repair damage inflicted by time, pollution and the weather. The cathedral's great organ has been damaged, but the rose window is likely to survive, experts believe. Photo AFP

As for the spire, historians believe it won't be a problem to rebuild it.

Middle Ages specialist Claude Gauvard, also the author of a book on the Gothic masterpiece observed that “the fact the spire has toppled is not so serious as we shall reconstruct it in accordance with Viollet-le-Duc's blueprint, which I greatly respect because without him the cathedral would no longer be there.

“Yet there will no longer be this 'forest', this magnificent wooden frame which held up the roofing.

And Gauvard warned the competing interests regarding the site could hinder reconstruction.

“Notre Dame's problem is that it comes under several jurisdictions: the Archbishopric, Paris, historic monuments, etc. That complicates its maintenance.

“I hope that national, indeed international donations will be forthcoming to finance the restoration as it's going to be very costly.”