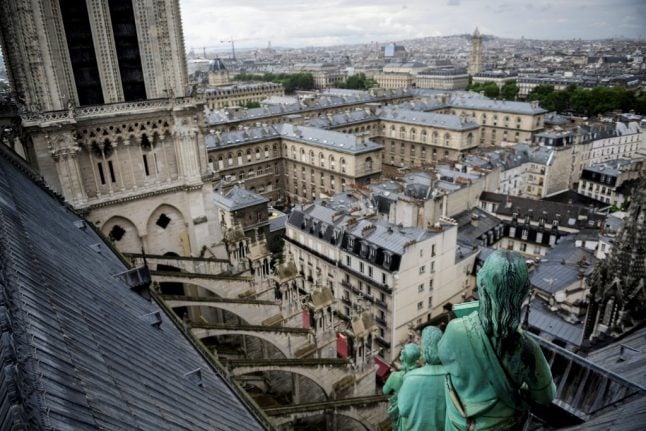 Even before Monday's colossal fire that destroyed much of Notre Dame cathedral, French author Victor Hugo would have been appalled to see the ravages inflicted by time, pollution and weather on his beloved Notre Dame, the soaring cathedral that adorns the heart of Paris. With its twin towers, stained-glass windows, gargoyles and flying buttresses – a colossal achievement that took more than a century to complete – the cathedral is a UNESCO World Heritage site that draws between 12 and 14 million visitors each year.

Though the French government currently spends €2 million a year for maintenance work, the conservation to-do list had grown long. Although that pales into insignificance compared with the huge restoration which will have to take place once the scale of the damage from the blaze has been gaged.

But the reality is that Notre-Dame had been neglected for too long and one French heritage expert believed the disaster was on the cards.

“What happened was bound to happen,” said Jean-Michel Leniaud, president of the scientific council at the national Heritage Institute. “The lack of real upkeep and daily attention to such a major building is the cause of this catastrophe.

“This is not about looking for people to blame. The responsibility is collective because this is the most loved monument in the country,” said Leniaud

But she added it had not always been treated with due reverence.

Gauvard is also of the opinion that not enough has been spent on maintenance.

“The ongoing works finally got started — and it was high time, and perhaps even a little late.

“I went up to the foot of the spire (before the renovations began) and some of the brickwork was disjointed, held in place by a grate to prevent it falling…” she said.

Centuries of time as well as acid rain and pollution had taken their toll on the cathedral's exterior.

In 2017 The Local reported how Gargoyles that had lost their heads were fixed up with unsightly plastic tubes for water drainage. Elsewhere, an entire stone balustrade was missing, replaced by plywood; a pinnacle has crumbled and a stained-glass window's frame was in a sorry state of repair. Decorative details that had fallen away from flying buttresses were set aside for safekeeping.

The central lead-clad wooden spire, which had risen 93 metres (300 feet) above the cathedral roof and weighed 250 tonnes, was also in need of costly restoration. It now needs to be rebuilt completely after dramatically collapsing during the fire.

The lead, meant to protect the spire from the elements, had been wearing thin. Paris sounded the alarm about the need to restore Notre-Dame several years ago, seeking donations notably from US patrons to help pay for the work, pledging to match up to four million euros donated to a heritage fund.

Through the Friends of Notre-Dame de Paris group, Paris's Roman Catholic diocese is reaching out to Americans “who have a culture of giving and are very attached to this monument”, Andre Finot, a spokesman for the cathedral, said in 2017.

Finot, who knows Notre Dame's every nook and cranny, was leading the funding drive.

“It's really urgent,” he told AFP at the time, during a tour of the devastation caused by air pollution and acid rain.

“You realise that (state funds) are not enough,” he said. By his estimate, the bill could come to at least 150 million euros over 30 years. Senior Advisor Fundraising for Friends of Notre-Dame, Michel Picaud told The Local in 2017 that turning to Americans for financial help was an obvious move given the amount of interest in the cathedral from across the pond.

“It was put to us that Notre-Dame is a world monument and we could look to raise money for its repair from outside of France,” Picaud said.
“We receive many requests from Americans wanting to know if there is a channel they can use to donate,” he said. “The cathedral is a big part of Paris' history but also a big part of American history in the city.” American tourists were particularly enthralled by Hugo's Quasimodo and other characters in “The Hunchback of Notre Dame”, immortalised in myriad films, plays and musicals.

While France spread the net wide in search of contributions, “we will still be appealing to the French,” the cathedral spokesman said in 2017. “They should be conscious of the incredible heritage they have.”

After the colossal blaze the French will be left in no doubt about the importance of their sacred cathedral considered the heart of Paris.