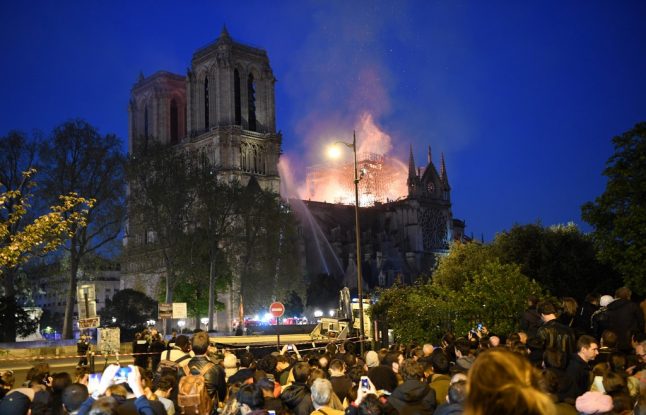 The colossal fire swept through the famed Notre-Dame Cathedral in central Paris on Monday evening, engulfing the roof and causing a spire to collapse.

Fire crews had initially been unsure if anything could be saved from the almost millennium old building, but after 400 firefighters battled for five hours it was gradually brought under control.

Late on Monday night, the city's top fire official announced that main structure of Notre-Dame has been saved.

Shortly after a visibly emotional President Emmanuel Macron told media at the scene that “we will rebuild Notre-Dame”.

With tears in his eyes Macron said that “the worst has been avoided” thanks to the work of firefighters.

The president vowed to draw on the best talent to rebuild the rest. “We can consider that the main structure of Notre-Dame has been saved and preserved,” Paris fire brigade chief Jean-Claude Gallet told reporters outside the cathedral, adding it appeared that the two main towers of the building had now been saved.

He said that the main task now was to cool the temperature inside the cathedral, a procedure that would take several hours.

Once the building is safe to enter, an inquiry can begin into how the fire started.

Deputy Interior Minister Laurent Nunez, also present at the scene, said that for the first time “the fire had decreased in intensity” while still urging “extreme caution”.

A senior fire official at the scene had earlier  told journalists on Monday night that they may not be able to halt the spread of the fire, due its severity.

Deputy Interior Minister Laurent Nunez, also speaking at the scene, added that saving the gothic monument “is not certain.”

Paris deputy mayor Emmanuel Gregoire told the BFM news channel that firefighters had entered the cathedral and had brought out some of its priceless artworks.

But they had been forced to withdraw as the flames spread rapidly through the wooden beams holding up the roof.

The French civil protection service that they would not be taking on board a suggestion from US President Donald Trump, who had tweeted that 'flying water tankers' could be used.

The service said that all measures were being deployed, but the one thing it was not contemplating was using aerial tankers, which dump enormously heavy loads of water, usually on wildfires.

“Hundreds of firemen of the Paris Fire Brigade are doing everything they can to bring the terrible Notre-Dame fire under control,” the civil protection service said in a statement.

“All means are being used, except for water-bombing aircraft which, if used, could lead to the collapse of the entire structure of the cathedral.”

It’s getting worse. But the fire brigade has turned up. Hard to see how the tackle this. The plume of smoke is already 100s of feet long. pic.twitter.com/5LBf2odKka

Hundreds of people, both Parisiens and tourists went to the banks of the Seine to watch events unfold.

Some were in tears, others offered prayers from the banks of the river Seine as the much-loved attraction at the heart of the City of Light was consumed by the inferno.

“This is really sad – the saddest thing I've ever stood and watched in my life,” said British tourist Sam Ogden, a 50-year-old onlooker, who had come to visit the cathedral with her family.

Gasps and cries of “Oh my god” erupted around an hour after the fire first broke out when the top portion of the church's spire came crashing down.

“It looked tiny to begin with, then within an hour it all came down,” Ogden added.

The fire, which began in the early evening, sent flames and huge clouds of grey smoke billowing into the Paris sky as stunned Parisians and tourists watched on in sheer horror.

The cause of the blaze was not immediately confirmed but the cathedral had been undergoing intense restoration work to help the 850-year-old gothic masterpiece better deal with the tests of time.

The flames and smoke plumed from the spire and roof of the cathedral, visited by millions of people a year.

Deputy Paris mayor Emmanuel Gregoire told BFM TV the spire “collapsed inwards” and that workers were scrambling “to save all the artworks that can be saved.”

READ ALSO What you need to know about Notre-Dame cathedral

A spokesman for the cathedral told AFP that the wooden structure supporting the roof was being gutted by the blaze.

“Everything is burning,” the spokesman for Notre Dame, Andre Finot, told AFP.

The fire service said the blaze could be “potentially linked” to ongoing renovations.

Meanwhile neighbours living in the vicinity had to be evacuated.

President Emmanuel Macron cancelled a planned TV appearance – where he had been going to lay out his proposals to respond to months of 'yellow vest' protests – to go to the scene. The Paris police department in a tweet called on residents to avoid the area and to “make way for rescue vehicles”.

Paris mayor Anne Hidalgo in a tweet described it as a “terrible fire”.

“The Paris fire service is trying to control the flames,” she wrote on Twitter, asking residents to respect the security cordon thrown up around the site.

Notre Dame is on fire. Paris is covered in smoke! pic.twitter.com/s4xR5I3eC0

A spokesperson for the cathedral said the fire, which comes as French Catholics prepare to celebrate Easter, broke out at around 17:50 local time. The Paris police department in a tweet called on residents to avoid the  area and to “make way for rescue vehicles”.

Many of the surrounding roads have been closed to allow emergency vehicles access.