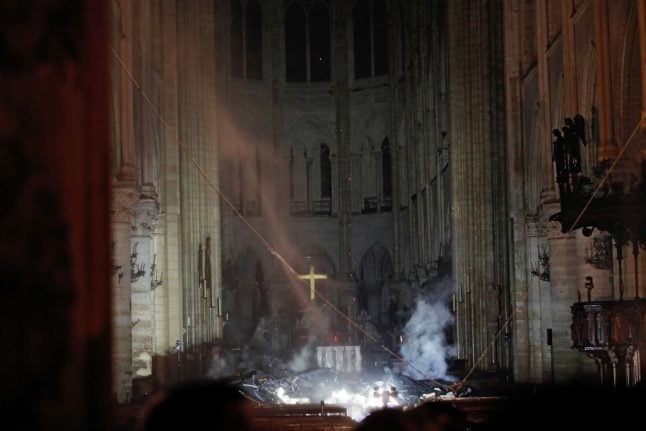 The charred and gutted interior of Notre-Dame. Photo: AFP

Firefighters finally declared the blaze under control at about 4am local time, after battling the flames for many hours.

On firefighter was injured during the operation, fire chiefs added.

As smoke drifted around the site and a stunned world contemplated the scale of the disaster, thoughts were already turning to rebuilding. French president Emmanuel Macron visited the site on Monday night and announced that an international fund will open on Tuesday.

And late on Monday night French billionaire Pinault – husband of actress Salma Hayek and CEO of the company that owns fashion houses Gucci and Yves Saint Laurent – pledged his donation.

In a statement sent to AFP the CEO of the Kering group, which owns Gucci and Yves Saint Laurent, said the money towards “the effort necessary to completely rebuild Notre-Dame” would be paid by the Pinault family's investment firm Artemis.

Macron expressed relief that “the worst had been avoided” in a blaze that had at one point threatened the entire edifice, and left France in shock over the damage to a building described as the soul of the nation. As dawn broke the fire was finally declared under control. Photo AFP

The inferno destroyed the roof of the 850-year-old UNESCO world heritage landmark, whose spectacular Gothic spire collapsed as orange flames and clouds of grey smoke billowed into the sky.

Around 400 firefighters battled into the night to control the flames, declaring in the early hours of Tuesday that the fire was under control, around nine hours after it broke out.

Paris fire brigade chief Jean-Claude Gallet said “we can consider that the main structure of Notre-Dame has been saved and preserved” as well as the two towers.

“Notre-Dame survived all the wars, all the bombardments. We never though it could burn. I feel incredibly sad and empty,” Stephane Seigneurie, a consultant who joined other shocked onlookers in a solemn rendition of “Ave Maria” as they watched the fire from a nearby bridge.

Gasps and cries of “Oh my god” erupted around an hour after the fire first broke out when the top portion of the church's spire came crashing down.

“We have been dealt a knockout blow,” a stricken-looking Paris Archbishop Michel Aupetit told reporters.

The cause of the blaze was not immediately clear, but the cathedral had been undergoing intense restoration work which the fire service said could be linked to the blaze.

French prosecutors said it was being currently being treated as accident.