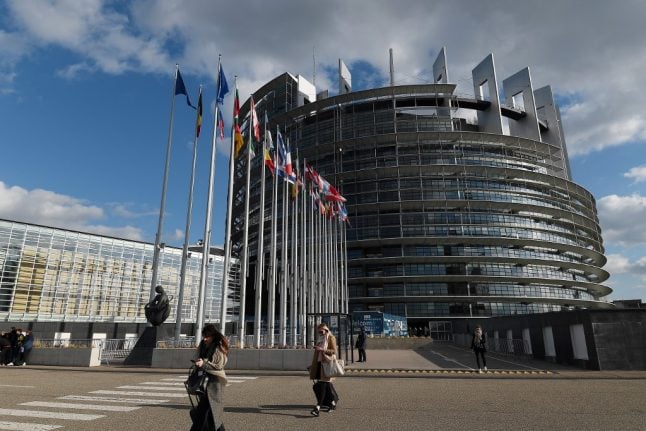 How can you make sure your voice is heard in the European parliament? Photo: AFP

Where can I vote?

If you are a Briton living in France, you can still vote in the European elections, thanks to the latest Brexit delay.

Voting in the UK

Voter registration is, however, still open in the UK and provided you have not lived out of the country for more than 15 years you are eligible to vote in European elections. You will need to register by May 7 – registration can be done online here.

Postal votes must be sent in time to ensure they arrive at your polling station by 10pm on polling day – which in the UK is on Thursday, May 23.

If you are already registered to vote (or are a citizen) you can vote here. Unlike under the two-vote system for presidential elections, European election voters vote just once, on Sunday, May 26.

Polling booths open at 8am and close at 6pm (or sometimes 8pm in the larger cities). All campaigning must end by Friday, May 24 and on Sunday no election polls may be published.

Voters cast their ballot using a pre-printed sheet at the polling booth, then must sign the electoral register to avoid double voting. Remember, you will need photo ID (a passport or identity card) at the polling station, or you will not be able to cast your vote.

How does voting work?

The system for European elections differs from most countries' domestic polls. MEPs are elected once every five years. Each country is given an allocation of MEPs roughly based on population size. At present there are 751 MEPs, of which 73 represent the UK. Germany – the country in the bloc with the largest population – has 96 while the smallest number belong to Malta with just six. France has 74, one more than Italy and the UK.

In the UK, the country is divided in to regions, based on population, which MEPs represent.

These are much larger than standard parliamentary constituencies – for example the North West of England counts as one area, as does the North East and London, but each area has several MEPs. Candidates are elected on a proportional representation system – so the party that does the best gets the highest number of MEPs. There are 12 constituencies in the UK.

By contrast all other European countries apart from Ireland and Belgium have adopted the 'one constituency' rule and elect their MEPs through direct proportional representation. Meaning parties gain the number of MEPs equivalent that their share of the overall vote.

When (if?) the UK leaves the EU, the number of seats in the Parliament will be reduced from 751 to 705, and some countries will be given extra seats. France is scheduled to get an extra five MEPs once the UK is no longer involved in European elections.

What about Brexit and other key issues?

In the UK, Brexit will dominate the debate, with many predicting that voters will use the European elections as a soft referendum on Britain's departure from the EU.

The elections will pit pro-Brexit parties against pro Europe anti-Brexit parties with voters also expected to punish the ruling Conservative party for the months of chaos.

If you want to express your anger at Brexit and show support for Britain's role in the EU then you have a few choices.

The Labour Party is currently deciding its stance with an internal battle raging over whether it should back a second-referendum or so-called confirmatory vote in the party's election manifesto. Watch this space.

The only parties that are explicitly standing on a 'reverse Brexit' platform are the Liberal Democrats, the new party Change UK which was born out of a move by 11 anti-Brexit MEPs to quit the two main parties and – in Scotland – the SNP.

On the other side of the spectrum the anti-EU party UKIP will be fielding candidates on a pro-Brexit platform, as will Nigel Farage's new Brexit Party. Natalie Loiseau is to lead the list for Macron's party in the European elections. Photo: AFP

And if I'm voting in France?

In France like in much of Europe, attention will be focused far more on the anti-EU far right parties.

The French election is largely being billed as the pro-European Macron and his party La Republique en Marche (REM) versus the Eurosceptic Le Pen.

Former Europe Minister Natalie Loiseau – widely seen as a friendly presence to Brits in France during Brexit debates – has quit the government to run in the European elections for Macron's party.

Early analysis by European news website Politico showed that far-right parties in both France and Germany are outpacing mainstream political groups on Facebook when posting about the European elections and winning engagement from users.

“The fact that the mainstream parties aren’t discussing the elections has left an enormous vacuum into which these far-right parties have leapt,” Chloe Colliver, of anti-extremist think tank ISD told Politico.

“I worry these narratives will come to dominate the discussion around the European elections.”

And will Britain definitely be involved?

Probably. As ever with Brexit, there is no certainty on this. The UK has won an extension until October 31, but if the British parliament agrees on Theresa May's deal, Brexit could still happen before the elections in May, although this is probably unlikely.

Elections can be called off as late as the day before polling, according the the UK's electoral commission, so if a deal gets passed by May 22 the poll in Britain could still be cancelled. If this happened the national government would have to refund local authorities anything they have spent on an election that does not take place (for example hiring locations as polling stations).

When is the election?

Polling day varies between countries, but will be between Thursday, May 23 and Sunday, May 26. In the UK polling day is on Thursday, in France (and the majority of other European countries) it's Sunday, although some of France's overseas territories will hold polling on Saturday.