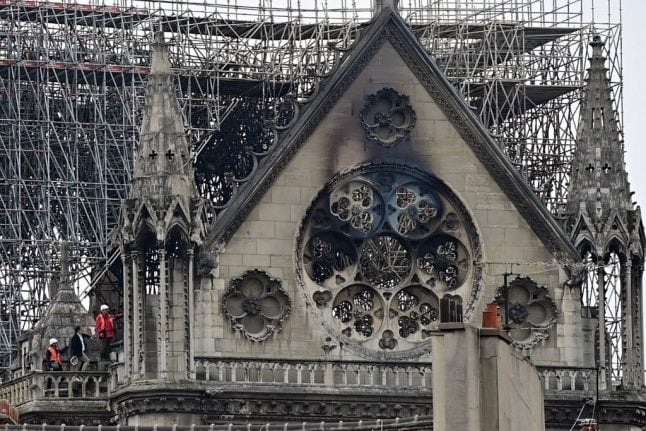 On Tuesday junior Interior Minister Laurent Nunez told the press that “some weaknesses” had been identified in the structure of Notre-Dame a day after the cathedral was ravaged by a colossal fire.

“Globally the structure is holding up well, but some weaknesses have been identified particularly in the vault and the gable of the northern transept, which have to be secured,” Nunez told reporters at the scene, adding that five neighbouring buildings had been evacuated.

The analysis was made by a group of experts, including the police and architects, who had been brought in to study the damage caused by the fire.

The horrific fire was finally declared extinguished at around 10am on Tuesday, over 15 hours after the fire first started in the attic of the famous cathedral.

But experts said the safety of the structure was still in doubt as firefighters and engineers gathered on the site.

Meanwhile the Paris prosecutor, who began an investigation as the flames still raged, confirmed on Tuesday morning that the cause was accidental, not an arson attack.

“Nothing suggests that it was a voluntary act,” Remy Heitz told reporters outside the Gothic cathedral, adding that workers employed at the site were being questioned over Monday's blaze. “The whole fire has been extinguished.

“Now we're in the phase of investigating,” spokesman Gabriel Plus told reporters on Tuesday morning, adding that the fire had spread “very quickly” through the wooden roof of the world renowned monument.

Briefing reporters in front of Notre-Dame in central Paris, Plus said firefighters had focused during the morning on the cathedral's two massive bell towers and making sure they had not been damaged.

The task now is to monitor the structure, to see if it has moved at all and to put out remaining hot spots, he said, adding that about 100 firemen will remain on site for the whole day.

The blaze which erupted at about 7pm on Monday, completely engulfed the roof of the 850-year-old cathedral, causing the famous spire to collapse and part of the vault.

On Tuesday government ministers met to devise a reconstruction plan, while the investigation into the cause of the blaze continues. Police had interviewed workmen on the site with investigators believing the blaze was caused accidentally and was linked to renovation work at the historic cathedral. Flames engulfed the roof and lead to the spire collapsing. Photo: AFP

Firefighters, engineers and experts were on the scene this morning, and warned that there are still doubts about the safety of the structure.

“The main structure has been saved but there is still a lot of instability, the situation is still precarious,” the Minister of Culture Franck Riester told French radio station France Inter.
Junior Interior Minister Laurent Nunez said questions will look at how the structure has resisted the fire.

“Last night, two thirds of the roof burned, the spire collapsed, creating a hole in the vault, part of the transept collapsed.”
The minister added that he wants to “remain cautious” but also “optimistic”.
“The two bell tower and the works were saved, including the treasure, thanks to the courage of the Paris fire brigade.
“The crown of thorns, the tunic of Saint-Louis are safe at the Paris City Hall. The organ is obviously quite affected, the large paintings, a priori, have water-related damage. They will have to be restored.”
Paris firefighters managed to save many of the cathedral's treasures before being beaten back by the intensity of the flames.
One firefighter and two police officers were injured overnight. Their conditions are not known but the injuries are not thought to be serious.
As dawn broke dozens of locals visited the scene to see the damage and pay their respects.

“I am so sad. We will rebuild it but it will never be the same again. It was like a nightmare watching those images last night,” another Parisian told me. #NotreDame pic.twitter.com/b8VSLJbzKP

One woman told The Local: “I'm very sad. I live in this arrondissement and Notre-Dame is part of my every day life. The cathedral is a great symbol of Paris and I used to visit every year with my mother.”
Another added: “I am so sad. We will rebuild it but it will never be the same again. It was like a nightmare watching those images last night.”