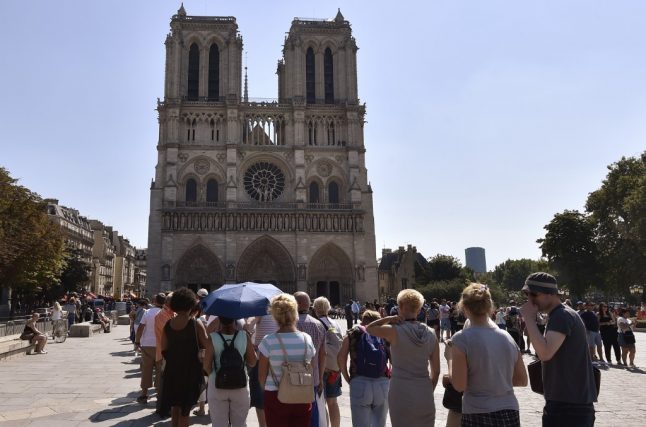 The architectural gem located on the Ile de la Cite – one of two tiny natural islands in the Seine River in Paris — was at the centre of the French capital in the Middle Ages.

Its construction began in the mid-12th century and continued for some 200 years.

During the 18th century French Revolution it was hit by many acts of vandalism, targeted as a Catholic symbol — its spire was dismantled, treasures plundered and the statues at its entrance doors destroyed.

It would go on to feature as a central character in Victor Hugo's 1831 novel “The Hunchback of Notre Dame” and shortly afterwards a restoration project lasting two decades got under way, led by architect Eugene Viollet-le-Duc.

It would survive the devastation of two world conflicts in the 20th century and famously rang its bells on August 24, 1944, announcing the liberation of Paris from German occupation at the end of the WWII. Around 12 to 14 million people visit the cathedral every year, an average of more than 30,000 per day.

A favourite for tourists, Notre Dame also attracts many couples hoping to tie the knot under its famed Gothic arches.

Five religious services are held there every day and seven on Sundays. In total more than 2,000 take place every year.

The cathedral's nine giant bells were replaced in 2013 and its spire, which collapsed on Monday, was in the process of being renovated.

Notre-Dame “is a symbol of Paris, a symbol of peace, togetherness and concord… which occupies an exceptional site at the heart of the city.”

It is also kilometre zero — the spot from which all distances to other cities from the French capital are measured.

“For me it is perhaps one of the most harmonious of cathedrals, symbolising at once the work of the craftsmen who built it — though through the ages it has been much loved and yet unloved.”

In need of repair

Gargoyles that have lost their heads have been fixed up with unsightly plastic tubes for water drainage. Elsewhere, an entire stone balustrade is missing, replaced by plywood; a pinnacle has crumbled and a stained-glass window's frame is in a sorry state of repair.

In recent years Notre Dame has also been the site of tragedy. Its bells rang the day after the attacks on the Charlie Hebdo satirical newspaper in 2015 to honour the victims.

A year later top civil and religious officials gathered at the cathedral for a mass in honour of Jacques Hamel, the French priest who had his throat slit by Islamists in the diocese of Rouen, a northern city.

In September 2016 a car packed with gas canisters was discovered near the cathedral. Three women believed to have been spurred by the Islamic State group were subsequently charged with terror offences.

And in June 2017 an Algerian shouting “This is for Syria” tried to attack a policeman with a hammer outside Notre Dame but was shot and wounded.