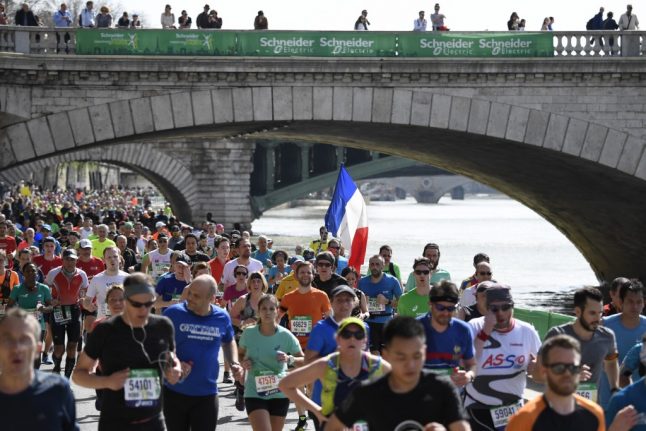 There will be a total of 50,000 runners pounding the pavements this weekend. Photo: AFP

The Paris marathon is one of the world's most popular running events – up there with London, New York and Berlin as the 'ultimate' experience for marathon runners.

This year it will be held on Sunday, April 14th, and is expected to attract 50,000 runners. The wheelchair race starts first at 8am local time, followed by the elite female and male runners at 8am and 8.30am respectively, with the rest of the field following on. The last runner is expected to finish at about 4.30pm.

What should I know if I'm running it?

The key advice from marathon veterans is to pick up your dossard, or number, as early as possible. Organisers open the number collection two days early and runners are advised to collect theirs on Friday if possible, or face long queues on Saturday.

Runners are also generally warned about the atmosphere – in contrast to New York or London there are generally not large crowds of spectators so you can't rely on the atmosphere to give you a boost if you hit the wall.

Also, the toilet facilities are not good, so many people simply go in the street or in the wooded areas of the course. What if I want to watch?

Spectators are generally thinner on the ground in Paris and it's not an event that Parisiens flock to watch. However if you do want to watch the runners go by, it will be easy to find a space, and the runners will generally be very grateful for your support. The Paris marathon basically takes in all of the city's best bits, so spectators are spoiled for choice in finding a scenic spot.

Some good places to combine marathon support with sightseeing include the Champs-Elysées, the Louvre, the Eiffel Tower or indeed anywhere on the banks of the Seine, which the race follows for a good section of the course. If you prefer a more pastoral setting, the race also goes through the Bois de Vincennes on the east of the city and the Bois de Boulogne on the west.

Will my street or Metro station be closed?

There are no Metro station closures planned, although the stations near the start – particularly Franklin D Roosevelt – are expected to be very busy on Sunday morning. Up at street level there are a large number of road closures to accommodate the marathon route. The closures include the Champs-Elysées, Place de la Bastille and several of the city centre Seine bridges. The full list of closures can be found here and be aware that some closures start on Friday evening and Saturday. There are also areas where motorists will be required to move parked cars.

Cold. Which might be good news for the runners, there's certainly going to be less of a risk of dehydration at this year's event than in some previous years, but spectators will want to bring out their big coat.

An icy wintry blast that hit most of northern France on Friday is forecast to stay for the whole weekend. Temperatures in Paris on Sunday are predicted to fall as low as 2C, rising to a maximum of 12. There will also be a chilly breeze and the possibility of rain later in the day. Find the full weather forecast here.