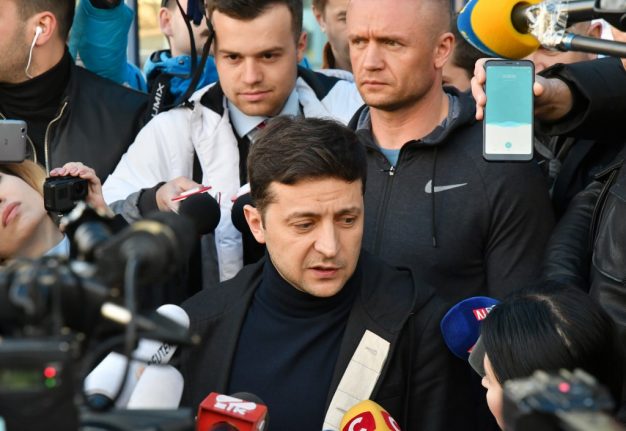 Volodymyr Zelensky will be welcomed to Paris. Photo: AFP

While many dismissed as a joke his bid to lead Ukraine – a country at war with Moscow-backed rebels – Zelensky defeated President Petro Poroshenko in the presidential vote's first round. Polls predict he will also win the election's run-off next Sunday.

The actor, whose only political experience is playing the president in a TV show, is due to meet Macron at the Elysee palace.

The Ukrainian leader said the pre-election talks in France and Germany are crucial for “the fate of the Ukrainian state and of European security”.

They were “especially important”, he said, in the face of “attempts” to lift Western sanctions against Russia, imposed on Moscow after its 2014  annexation of Ukraine's Crimea peninsula.

France and Germany are part of the so-called Normandy peace talks with Ukraine and Russia that aim to end a conflict between Kiev and the Moscow-backed separatists in eastern Ukraine. The war has killed 13,000 people over the past five years.

Kiev and its Western allies accuse Russia of supporting the rebels militarily. Moscow denies that.

Zelensky, 41, has shunned traditional rallies, instead performing satirical shows and capitalising on frustration over corruption and economic trouble.

By welcoming him, Paris has caused some annoyance in Kiev.

“This is a very unpleasant and strange situation,” a high-ranking Ukrainian diplomatic source told AFP.

Analysts say the decision to host the comedian is explained by his success in the March 31 first round, when he won 30 percent of the vote. Poroshenko took almost 16 percent.

A new poll released Thursday showed 61 percent of Ukrainians intend to vote for Zelensky in the second round on Sunday. It found only 24 percent would back Poroshenko.

“France is showing that it knows what the direction the Ukrainian electorate is heading in towards and that it has to make contact,” said Leonid Litra, an analyst at the Kiev-based New Europe Centre.