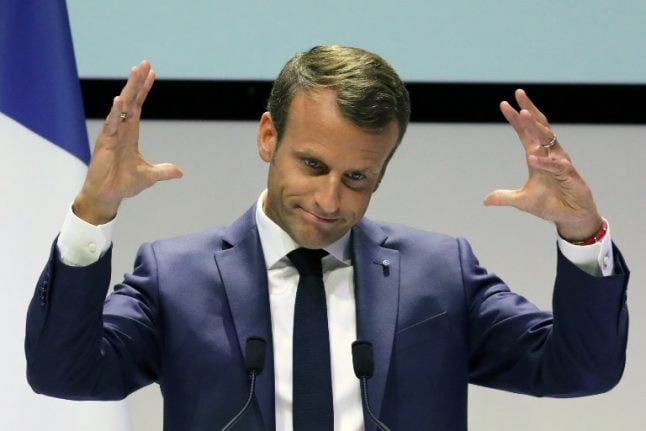 Emmanuel Macron says he will cast a symbolic no vote. Photo: AFP

“France will probably be the only country to vote against” in a largely symbolic ballot on Monday, the presidency said, citing President Emmanuel Macron's insistence on the US first signing back up to the Paris climate accord.

Envoys from the EU's 28 member states had struggled to agree on a mandate to open trans-Atlantic talks, with some fearing the revival of a trade war with President Donald Trump. Emmanuel Macron and Donald Trump have had a turbulent relationship. Photo: AFP

But a European diplomat told AFP that they had agreed by consensus to finally begin the negotiations.

Pursuing a limited trade deal is a central component of a transatlantic truce negotiated in July that came close to imploding after the US on Tuesday threatened $11 billion in fresh trade tariffs against Europe.

Paris had initially blocked the mandate, which mainly aims to eliminate tariffs, worried of domestic blowback just months ahead of European elections, set for May 22 to 26.

On Thursday, a presidential aide said that France would “probably be the only country to vote against”, citing President Emmanuel Macron's insistence on the US first signing back up to the Paris climate accord as justification.

“It would not be for right for France to start these negotiations unless our environmental demands are met,” the aide said.

But only a qualified majority of EU members need to support the talks in order for them to begin, meaning France's “non” will not hold up the process.

France's EU partners had tried to win Macron over by agreeing to insist on environmental guarantees during the talks with Washington, which pulled out of the climate agreement after Donald Trump came to power, infuriating Macron.

“France achieved a certain number of advances,” Macron's aide acknowledged, also citing the scrapping of the negotiating mandate for the TTIP, a far more ambitious transatlantic trade plan that came to naught, and an agreement to keep agricultural products off the table.

But the concessions were “not enough,” the aide said, adding that Paris was smarting over Trump's latest tariff threats and his refusal to reverse steep tariffs on European steel and aluminium.

The TTIP deal stalled following widespread protests in Germany, France and Austria over fears it would undermine EU standards on food and health.

Berlin strongly wants the limited deal in order to placate Trump and avoid US auto tariffs that would punish Germany's cherished exports, a prospect Chancellor Angela Merkel has labelled “frightening”.

The mandate from the EU stipulates that the talks would end if the US pursued more levies against Europe, including on cars.

At a meeting last July at the White House, Trump and European Commission President Jean-Claude Juncker pledged no new tariffs following those on steel and aluminium.

That peace was in danger on Monday as the US threatened to impose tariff counter-measures of up to $11.2 billion on a host of European products in response to subsidies received by aircraft maker Airbus.

In a tweet Trump said: “The EU has taken advantage of the US on trade for many years. It will soon stop!”