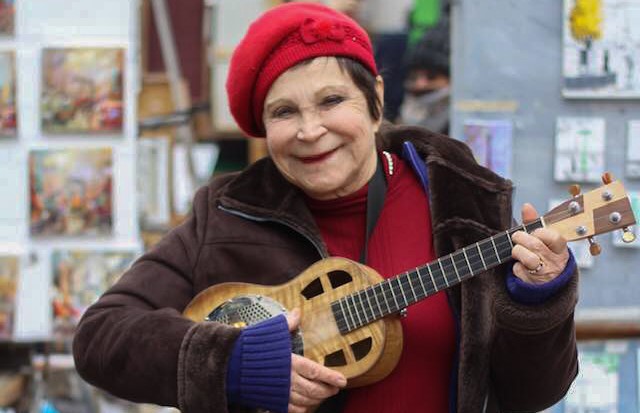 I have always loved the city of Paris. It is the true love of my life and the place where I began my career as a cabaret singer, way back in 1963.

I grew up in Boston and after college I married a nice Jewish boy named Irwin Cohen.

However, Irwin didn’t turn out to be a great husband – he didn’t know how to pleasure a woman.

Actually, that wouldn’t matter except the woman was me. So after my divorce in 1963, I went to Paris to find out about life.

I studied music and mime and in the evenings, I went to see the nightlife. D'yan at the start of her Paris cabaret career. Photo: D'yan Forest

I never drank much before I went to Paris, but I started drinking Cognac while I was there. I noticed that in the nightclubs, the French people would order a Cognac at 10 pm when they arrived and kept sipping it until they left at 2 am. My ginger-ale only lasted a half hour and at 15 francs a drink, I realised sipping Cognac would be the cheapest answer to my nightclub evening.

I started hanging out in a wonderful club called Elle et Lui. They had a singer named Maria Vincent from Corsica, who became a celebrity when her drug dealer husband was brutally and publicly murdered, shot down in the street. Today, she’d be a reality TV star – like Kim Kardashian – but back then you had to have an act.

I met Maria after the show and told her I was a cabaret singer in Boston and asked if I could try out one song during her show the next week. She said “oui” and that I could open for her in the club.

I’ll never forget that night in the dressing room. I was a bundle of nerves as I watched a bunch of chorus girls at their dressing tables. I’d never seen more stunning women in my life.

Every one of them was statuesque and their hair, their nails, their long, long legs – all perfectly gorgeous.

They were all talking about their dates after their show the night before. I had never heard such frank language in my life.

I’m staring and staring at them, jealous of their looks and wishing I could be at least one hundredth as beautiful as they were. Then one of them stood up directly in front of me and… adjusted herself. She was either the most well-endowed woman I’d ever seen – or she was a he! Mon Dieu! They all were guys!

What a revelation this was. In Boston, in the 60’s we didn’t even know about these things. My education in Paris was just beginning. D'yan performing in cabaret clubs in Paris in the 1960s. Photo: D'yan Forest

Finally, my set was ready to begin. I knew this was my big chance, so I picked a song that couldn’t go wrong. It was from a new musical in the States and every American knew the song, it was all over TV and popular culture. I was going to be a hit!

I nervously went to the piano and played and sang Hello Dolly.

The audience looked at me like I had two heads. Clearly they had never heard the song and couldn't care less who the hell Dolly was but I soldiered on.

A guy in the crowd yelled, “Go away!” Without thinking, I immediately yelled back, “Fou le can! No foulez moi, foulez-vous!” (A phrase I had just learned to tell the French men who were bothering me on the street, in plain English, to “fuck off.”)

There was no applause, nothing. I ran backstage and even the drag queens were silent. When drag queens stop talking – that’s serious.

I was gathering my things and Maria came rushing in, “Ma Cherie, zare eez a second show!”

“A second show?!” I gasped. “You’re not going to fire me?! “No, no cherie. But zees time, peek a different fucking song!”

Which I did. I chose Allouette and I even had the audience sing with me and point to the body parts mentioned in the song. I was a huge success and brought down the house. Even the drag queens were impressed!

And for the next few years, I played and sang in every café and cabaret that would have me and I managed to scrape together a living… nearly.

I’ve done many wonderful shows around the world, over the years but I’ll never forget that Maria Vincent in Elle Et Lui who started me on this wonderful French career.

D'yan Forest has a new one-woman show opening in Paris on Saturday, April 13th at 5.15pm at La Nouvelle Seine, 3 Quai de Montebello, 75005 Paris. Swinging on the Seine covers her remarkable career from her cabaret debut in the 1960s to her present day incarnation as a stand-up comedian who performs in both English and French in Paris. Tickets are €22 on the door or €10.95 if bought in advance here.