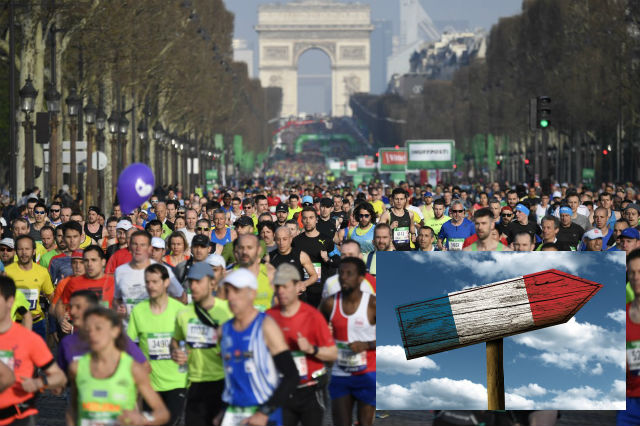 Kite festival, Berck-sur-Mer, northern France, April 6th-14th
The long, windy beaches of Berck sur Mer see hundreds of thousands of tourists gather annually to admire giant kites of all shapes, sizes and colours.
It might have started on Saturday but there will be displays, workshops and fireworks at night for the whole week until Sunday April 14th. People flying kites during the 32nd International Kite Festival in Berck-sur-Mer in 2018. Photo: AFP
Monday marks the opening of this year's annual MIPTV event (International Market for Content Development and Distribution) in Cannes.

The event, which this year will take place from April 8th-11th, is a content market for co-producing, buying, selling, financing and distributing entertainment content.

British Prime Minister Theresa May is to visit France for a meeting with President Emmanuel Macron on her way to the crunch EU summit where she will ask for another Brexit extension.
Emmanuel Macron's office said on Monday that he will meet Theresa May on Tuesday, one day before an EU summit where she is expected to ask the bloc for another delay to Brexit.
The two leaders are scheduled to meet at 6pm local time, with May also travelling to Berlin for talks on Tuesday with German Chancellor Angela Merkel. Photo: AFP
The French government is set to make an announcement on the results of the Great Debate in front of the country's MPs on Tuesday.
Giving the first conclusions of a “Great National Debate” which was launched in January in response to the protests, Prime Minister Edouard Philippe said on Monday that French citizens had expressed “an enormous exasperation” over the heavy tax burden.
“The debates show us very clearly which way to go. We need to lower taxes, and lower them more quickly,” he told an audience in Paris.
Wednesday April 10th
Macron will be in Brussels on Wednesday for the emergency summit meeting of European leaders to discuss whether the UK will be granted an extension to Brexit.
France has sought to ramp up pressure on British Prime Minister Theresa May, with Macron saying that her request for an extension of the deadline for Brexit would not automatically be accepted, meaning Britain could crash out of the bloc without a deal.
Thursday April 11th
The ten candidates at the top of the list for the European elections will present their views on social issues, sustainable development and digital issues.
Pensioners are set to take to the streets to protest their diminishing spending power on Thursday.
Legendary American singer-songwriter Bob Dylan will play three nights at the Grand Rex in Paris from April 11th to April 13th. Bob Dylan performs at the Vieilles Charrues music festival in western France in 2012. Photo: AFP
Friday April 12th
We know you've heard this before but Friday *could* be a big day for British people living in France.
Friday is currently Brexit day, with the UK set to crash out on April 12th if it can't secure another extension from the EU (unless it decides to cancel Brexit altogether).
Whether this will happen depends on what is decided at the emergency meeting on Wednesday in Brussels (see above).
The Youth for Climate campaign group will be holding two protests in France on Saturday — one in Paris, and another in Lyon.
Saturday April 13th
The first general meeting of female journalists will take place on April 13th in Paris.
The purpose of the event is to develop concrete solutions to discrimination and harassment in newsrooms.
There will also be demonstrations from “yellow vests” on Saturday. Exact details have not yet been announced, but organisers have said that protests will continue throughout April.
Sunday April 14th
Paris Marathon
This will be the 43rd edition of the Paris marathon, one of the world's biggest, with a route taking in iconic Parisian views. Even if you won't be participating, you can find a scenic spot to watch the racers and enjoy some of the entertainment on offer for the occasion.
The “Salon du Running”, which takes place three days before the marathon at Porte de Versailles, has become part of the build up the run, where running fans can meet over 200 professionals.