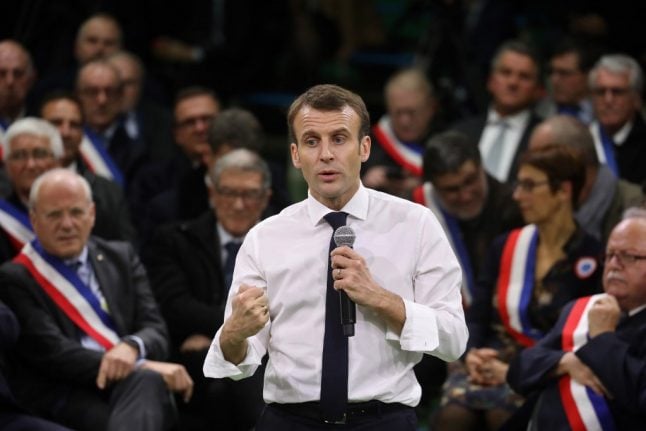 Photo: AFP
The debate was launched in January by President Emmanuel Macron as a response to protests by “yellow vest” demonstrators whose nation-wide revolt over living standards created the biggest crisis of his time in office.
By inviting voters to take part, Macron had twin objectives: anger could be channelled away from the streets and into townhall meetings, while he could soften his image by showing he was open to listening.
“I intend to transform anger into solutions,” he declared in an open letter to the country on January 13, referring to the protests which had seen crowds block roads and repeatedly riot on the Champs-Elysees.
“Your proposals will help build a new contract for the nation,” he promised. Photo: AFP
After a shaky start, when the chief organiser had to step down due to an outcry over her salary, most observers see the exercise so far as a qualified success for the 41-year-old centrist.
The number of contributions demonstrated a level of enthusiasm that looked uncertain at the start, while the president has visibly enjoyed meeting voters at campaign-style events in community centres around the country.
“He loves it,” one advisor told AFP on the sidelines of the first event which saw him hold court for six and a half hours in a show of stamina that left many participants exhausted.
His catastrophic approval ratings in late 2018 have crept back up, meanwhile, with recent polls showing around 30 percent of voters holding a positive view of the former investment banker.
National 'bla-bla'?
But Macron and his government are now expected to deliver results having built up expectations about an exercise that has been dismissed as the “Great National Bla-bla” by many opponents.
“Nothing will be the same as before,” government spokesman Sibeth Ndiaye marshalled again on Sunday, underlining how the debate has been billed as a
watershed in Macron's presidency. Photo: AFP
At an event in Paris on Monday, Prime Minister Philippe is set to lay out the first wave of conclusions in the presence of ministers, experts and members of the public.
A polling firm and three political consultancies have attempted to crunch all the data from the internet, public meetings and 16,000 books which have been left open in mayor's offices around the country to record grievances.
Insiders in the prime minister's office have stressed the difficulties of listening to a highly polarised country that looked on the edge of an insurrection in mid-December.
“There are a few things which jump out, but the reality is that there are big disparities in opinion on most subjects,” one aide told AFP.
Experts have pointed out other flaws: the preponderance of grey hair at many public meetings suggests older people are over-represented, while most “yellow vests” have boycotted proceedings. Photo: AFP
A front-page cartoon in the Charlie Hebdo satirical magazine in January showed two demonstrators taking part in a debate — but only to decide which blade to use as they put Macron in a guillotine.
Philippe said Friday that the the government had listened “to everything that the people had to say, in their great diversity, and sometimes in their great complexity”.
Impatience
Macron is expected to try to turn the feedback into policy changes with a major speech planned in the middle of the month.
“Every debate has given him some new ideas. But he hasn't made his mind up yet,” an aide told AFP last week on condition of anonymity. “He's going to consult some more. But ultimately he'll decide on his own, and perhaps at the last minute.”
He has given little away publicly, but he has stressed that widespread demands for tax cuts must be accompanied by reductions in public spending.
He has also ruled out reintroducing a special tax for the wealthy which he scrapped early in his term in a bid to encourage investment and job creation.
Reintroducing it has been one of the main demands of the “yellow vests” who continue to mobilise every Saturday, but in far smaller numbers than at the start of the year.
A referendum could also be on the cards, possibly to validate plans to reduce the number of national lawmakers and change the voting system for some seats.
“France is not a round-table or a political brain-storming session,” the centre-right Le Figaro newspaper wrote last week, expressing growing impatience with the debate format.
“Everyone now — citizens, lawmakers, even ministers — expects decisions,” it added.