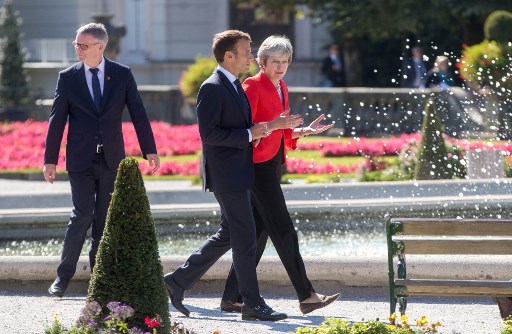 Theresa May is to visit France on Tuesday. Photo: AFP

Emmanuel Macron's office said on Monday that he will meet Theresa May on Tuesday, one day before an EU summit where she is expected to ask the bloc for another delay to Brexit.

The two leaders are scheduled to meet at 6pm local time, with May also travelling to Berlin for talks on Tuesday with German Chancellor Angela Merkel.

The European Council meets on Wednesday to consider Britain's request for an extension to the Brexit deadline, which is currently scheduled for Friday, April 12, until June 30.

A spokesman for German chancellor Angela Merkal said: “The Chancellor and the British Prime Minister will have an exchange of views on Britain's exit from the EU as well as on Wednesday's special summit of the European Council.

The spokesman noted that the final decision on May's request will be made by all 27 remaining members of the EU.

But there are “always good reasons in such difficult and highly charged situations in Britain and the EU 27 to first talk to each other before the first deadline,” he said.

The French president has been outspoken on the issue of a second Brexit extension, saying that the EU cant “be held hostage” to Brexit and warning that a second extension was from from a certainty.

Speaking during a visit to Paris by Irish Prime Minister Leo Varadkar on April 2, the French leader said: “The EU cannot be held hostage to the resolution of a political crisis in the United Kingdom on a long-term basis.”

He added that France was “open” to a lengthy extension of the Brexit deadline on certain conditions but that it was “neither a certainty nor automatic. I am repeating it here with conviction.”

The comments underline growing frustration in Paris about the Brexit process, which has diverted attention away from pro-European Macron's plans for reinforcing the bloc.

Britain was originally set to leave the EU n March 29, but was granted more time to prepare after British MPs three times rejected the deal that May had agreed with the bloc.

Any extension past May 23 would mean the UK has to take part in the upcoming European elections.