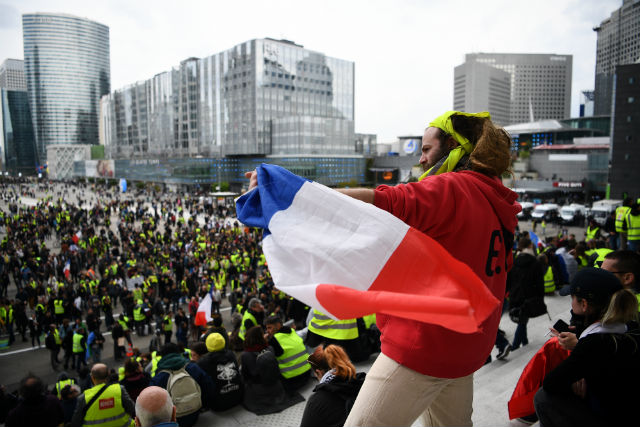 A protester holds up a French flag as 'yellow vests' meet at La Defense. Photo: Anne-Christine Poujoulat/AFP
From Rouen in the north and Lyon in the southeast — as well as the capital Paris — protesters took to the streets carrying banners denouncing French President Emmanuel Macron. In the west, French and German activists joined forces on the border.
Some masked protesters clashed with police in Rouen, but there was nothing like the scale of violence seen in previous weeks, such as the March 16 riots in Paris that saw luxury stores on the Champs-Elysées ransacked.
A man assists two yellow-vest protesters after violence broke out in the city of Lyon. Photo: Kenzo Tribouillard/AFP
Interior ministry figures — consistently dismissed as underestimates by the protesters — put the turnout across France at 22,300 of whom 3,500 were in Paris.
These are the lowest figures officially recorded, and significantly down on the 282,000 who turned out for the first yellow vest rally in November last year. But many of the remaining activists insist they will keep marching until they get satisfaction from the government.
“What will get me to stop, is the resignation of (Interior Minister Christophe) Castaner, because of the police violence,” said Catherine, 59, a demonstrator in Paris.
Castaner has been heavily criticised both by yellow vest activists and opposition politicians for having played down reports of police violence despite growing numbers of serious injuries among protesters.
A protester holds up a signs saying “and justice for all” as 'yellow vests' gathered at La Defense on Saturday. Photo: Anne-Christine Poujoulat/AFP
Results of consultation
Next week, the government will announce the results of the “Great National Debate”, a series of town hall meetings launched across France in January to take the temperature of the nation — and get Emmanuel Macron's troubled presidency back on course.
The idea is to collate grievances and decide on solutions. Macron's office said the president would announce the first measures to be taken by the middle of April.
But many yellow vest activists have denounced the exercise as a smoke screen designed to distract attention from their movement.
An opinion poll published Thursday by pollsters Delabre suggested that the public was not convinced either. Of 1,002 surveyed, 68 percent did not think that people's views would be taken into account; 79 percent did not think it would resolve the current political crisis.
The government received a setback last Thursday when France's Constitutional Council struck down a measure that would have let authorities ban certain individuals from protesting.
READ ALSO:
It was a key element of the government's plan to crack down on violence at “yellow vest” demonstrations, but the council, which rules on the validity of laws, said the proposal gave officials “excessive latitude”.
A new law will nevertheless allow the authorities to impose heavy fines on people organising unauthorised demonstrations and for anyone covering their face during a protest.
France has been rocked by months of weekly Saturday protests by the yellow vests, which emerged over fuel taxes before snowballing into a broad revolt against Macron.
While most demonstrators have marched peacefully, the protests have often degenerated into rioting and fierce clashes with police in Paris and other cities, often by far-left and far-right extremists wielding metal bars or slingshots.