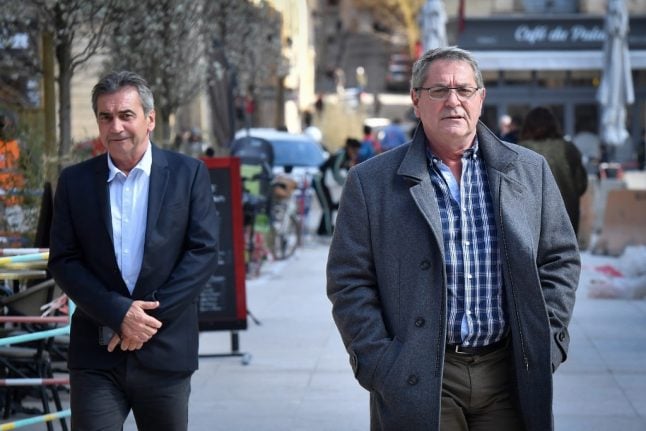 Bruno Odos (L) and Pascal Fauret prior to a court hearing last month. Photo: GERARD JULIEN / AFP
Pascal Fauret and Bruno Odos had fled the Dominican Republic following a raid on the private jet they were to fly to Saint-Tropez, southern France, but were re-arrested in France in November 2015.
In what has become known as the “Air Cocaine” case, Fauret and Odos were accused along with seven other defendants of trying to smuggle 680 kilogrammes (1,500 pounds) of the drug out of the country.
Two were acquitted following a seven-week trial. Ringleader Ali Bouchareb was sentenced to 18 years in prison, while his right-hand man, Frank Colin, got 12 years. Only Bouchareb was held in detention during the trial while the other eight had been granted bail.
Colin was the only defendant who had admitted to taking part in the smuggling operation but claimed he was in fact an “infiltrated agent”.
Dominican police found the drugs packed into 26 suitcases onboard a Falcon 50 jet as it was about to fly from the Dominican beach resort of Punta Cana to Saint-Tropez in March 2013.
While out on bail, Fauret and Odos managed to flee the Dominican Republic to French territory in the Caribbean in mysterious circumstances but were re-arrested upon their return to the French mainland in November 2015. They, along with two passengers, were found guilty in absentia and sentenced to 20 years in jail for drug-trafficking in the Dominican Republic in 2015.
On Friday, five French magistrates deliberated for 11 hours before handing down their verdict.
“It's a scandal! It's political! There is no justice…” screamed people close to the defendants as the verdict was announced.
Former customs agent Francois-Xavier Manchet was sentenced to five years in jail and barred from working again as a civil servant.