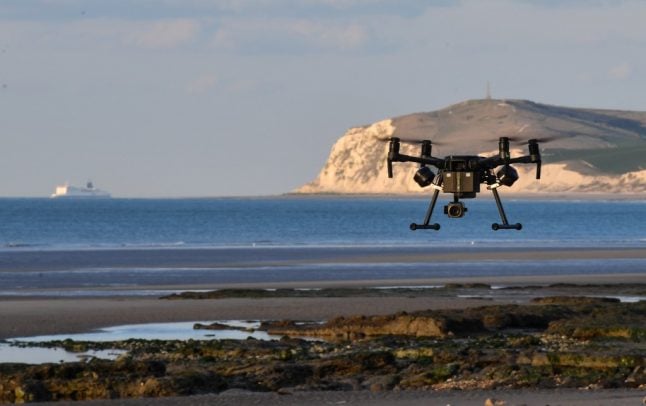 A drone used by the French border police takes off during a patrol of the beaches at Tardinghen near the northern port city of Calais on Thursday. Photo: Denis Charlet / AFP
Between January and March this year, 23 vessels carrying about 200 people managed to reach England's shores, down from 39 carrying 286 people between October and December, the head of security for the northern Pas-de-Calais region, Fabien Sudry, told reporters.
Sudry attributed the decline to tighter patrols along the northern French coast, long a staging post for attempts by mainly Afghan, Iranian, Iraqi and African migrants to reach England.
A helicopter, drones, night vision goggles and motocross bikes that can be ridden across the dunes have all been used to patrol a stretch of coast measuring around 80 kilometres, he said, adding that the police also carried out between 8 and 15 patrols on foot each day.
Most attempt to stow away on trucks crossing the Channel through the Eurotunnel in the port of Calais, where a huge migrant camp was demolished in 2016. But last year, the authorities noted an increase in the numbers braving the world's busiest shipping channel in small dinghies or stolen fishing boats, particularly Iranians and Iraqis.
“Unfortunately there still are some [crossings] but we have noted a sharp decline,” Sudry said.
French police intervened 15 times between January and March to prevent groups of migrants putting out to sea, down from 22 times in the last three months of 2018, he said.
Some 500 people attempted to cross the Channel last year, compared with just 13 known attempts in 2017. Around half managed to reach British waters. The numbers represent a tiny fraction of the numbers crossing the Mediterranean from North Africa.