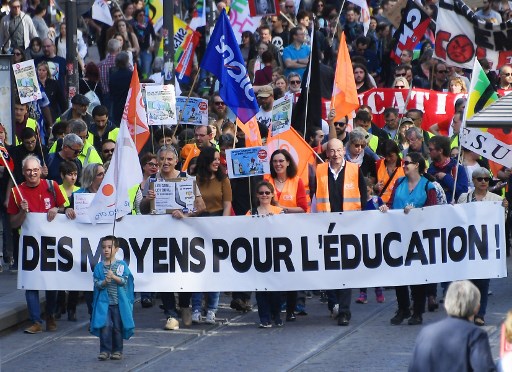 Teachers across France have downed tools on Thursday, forcing many schools to close completely, as unions continue their battle against the new law.

Many teachers – and parents as well – are up in arms about the government's plans for far-reaching reforms to France's school system, called the “Loi Blanquer” after Education Minister Jean-Michel Blanquer,  which was voted through parliament in February.

There has been sporadic strike action in schools, particularly last week but Thursday is the first concerted protest day.

The law obliges schools to look after their pupils even if teachers are on strike, but only a “minimum service” is provided, with no classes, no canteen, and no after-school clubs.

And while this is meant to be obligatory, some schools either defy the law or do not provide the service because they simply don’t have the staff.

The “Loi Blanquer” now has to be approved by the Senate and if it is, the changes are set to come into effect at the start of the next school year in September. The new measures will affect pupils from écoles maternelles (nursery schools) all the way through to écoles primaires (primary schools) and collèges (middle schools) (for pupils aged 10-11 to 14-15).

Changes to the lycèe – the last three years of secondary school for pupils aged 14 plus – have already been pushed through, causing a wave of protests of their own late last year.

The most contentious issue in the latest reforms that has riled many is the plan to group elementary, primary and middle schools, in one administrative entity, with the collège director responsible for all three establishments.

Unions and parents believe that getting rid of nursery and primary school heads and bringing the schools under the control of the collège will ruin the close relationship parents had with primary schools heads.

Parents also fear this will simply lead to certain nursery and primary schools closing altogether, especially in rural areas, meaning children will no longer be able go to their local school.

The FSU union, in its call for teachers to strike on Thursday, urged them to “mobilise against this education policy that is retrograde and market-oriented, and which is being rammed through with complete disregard for their professional expertise and which already been condemned by the entire educational community.”

Angelina Bled, general secretary of France's Unsa student union, previously told The Local: “The government's 'Loi Blanquer' is being pushed through by force, even though it will completely change our profession and the way we work.

“But so far there hasn't been a proper discussion, which is vital in order to build a new school system that is meaningful.

“The reforms started with the idea of making school obligatory for all children from the age of three, which is a good thing. But then, lots of other points were added, without a coherent project in mind. Schools are being taken apart and put together again, but we don't really know what for.”