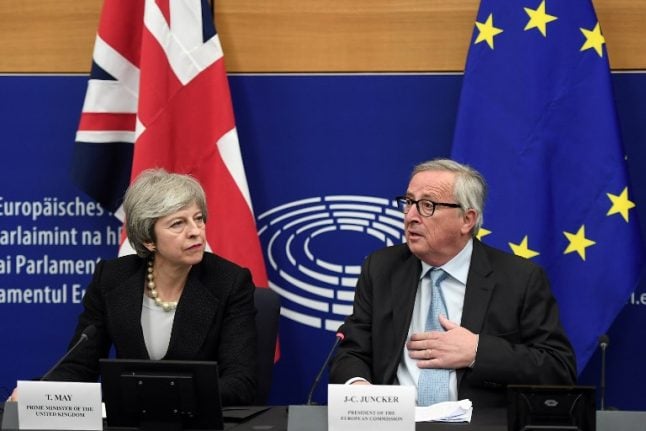 Although negotiations are ongoing, the French government has published a decree in the case of a no-deal Brexit. Photo: AFP

The government decree covers British people who are already resident in France on the date that Britain leaves the EU – which is currently scheduled for April 12, although this could be extended – and only applies in the case of a no-deal Brexit.

It is the first time the French government has laid out in detail exactly what criteria various different groups of British people – employed people, self-employed, students and family members – will have to fulfill if they want to remain in the country.

? The FR government published a decree relating to the rights of Brits in France. This decree follows the publication of the 6/02/19 ordonnance. We will provide further details on what this means for you very soon — Read the decree here: https://t.co/P3gwRROgIc#UKNationalsinEU pic.twitter.com/PFvZuQ4aBL

An ordonnance published in February gave British people in France a one year 'breathing period' after a no-deal Brexit in which they could apply for a carte de sejour.

The new decree lays out what paperwork each group will need to apply for residency.

People who already have a permanent carte de séjour as European citizens will be allowed to simply exchange it for one of the new cards by providing their valid passport and their current residency card.

If you are applying for a residency card for the first time, and have lived in France for more than five years, you will need to submit the following documents:

These conditions vary for different groups of people and they are as follows;

If you are applying for a student residency permit, you will need the following documents:

If you are applying as an employee, you will need the following documents:

If you are applying for a temporary working permit, you will need the following documents:

If you are applying as a freelance or self-employed, you will need to present the following documents:

*You will not be required to prove sufficient resources if you receive a disability allowance.

If you are applying as a family member to a British national who already has a permit, you will need:

The decree does not specifically mention retired people, but anyone who doesn't fall into any of the above categories will need to apply for a residency card and supply:

The decree does not contain any figures as to what is deemed a “sufficient resource” but says that applications will be individually assessed.

However there is an upper limit –  in no case must this be more than the level of the French in-work benefit RSA, Kalba Meadows from the campaign group RIFT has pointed out.

There are other figures for families with children – see the government website here for details.

The decree adds that if resources are not deemed to be sufficient, anyone who can prove that they own their own home – or are entitled to free accommodation – may receive a favourable decision, although this is not guaranteed.

What about people who have lived in France for less than five years?

People who have lived in France for less than five years cannot exchange a carte de sejour if they already have one, but must make a new application.

The paperwork needed for each group is broadly the same as for people who have lived in France for more than five years, with a couple of exceptions:

If you are applying as an employee you will apply for a four-year carte de séjour pluriannuelle only if you have a long-term CDI contract.

If you are on a short-term CCD contract you will apply for a carte de séjour temporaire marked ‘travailleur temporaire’, which last for one year at a time.

Anyone who is in receipt on jobseekers allowance must provide

Anyone who is retired or otherwise economically non-active must provide

So how has the decree gone down with Britons? Is it good news or bad?

Kalba Meadows from RIFT says in a post: “It's a mixture, and there are some clarifications needed before we can properly answer that question!”
For those over 65, on the whole it's good, as it reduces the level of 'sufficient resources' from its current (and higher) level of ASPA down to the lower RSA level.
For those who are working or self-employed, it means that you'll have to justify a certain level of resources for the first time – previously you'd have been required only to show that your work was 'genuine and effective'.

The first application for any residency permit will also incur a fee of €100 so the fee will be applicable for those without a carte de sejour.

Although British people are entitled to remain in France for up to a year after the withdrawal date, applications for residency must be filed within six months of the date that Britain finally leaved – which is currently set for April 12, but may yet change again.

The decree was published on Wednesday in the Journal Officiel, where all new French laws and decrees must be published before they come in to force.

To READ more about your rights in France you can visit the RIFT website.