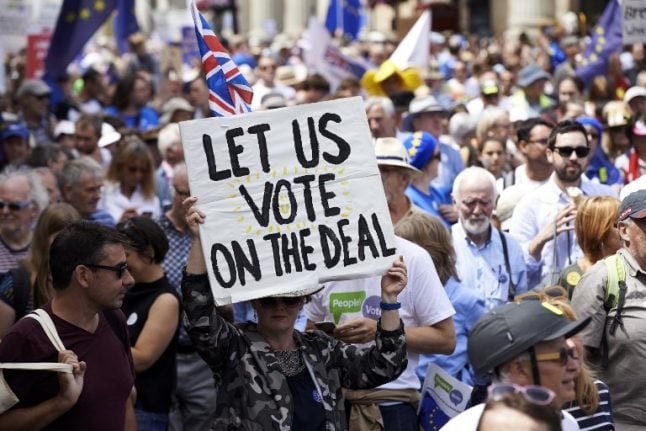 The French government has published a decree in the case of a no-deal Brexit. Photo: AFP

The French government on Wednesday morning laid out in detail for the first time what British people in France will need to do if they want to stay in the event of a no-deal Brexit.

READ ALSO French government's decree for a no-deal Brexit: What you need to know

The guidance provides a break-down of the requirements of different groups of people – employed, self-employed, families – and what paperwork they will need.

Citizens rights group Remain in France Together has described the decree as mixed, but containing plenty of good news for British people already living in France.

In a post on the group's website, spokesperson Kalba Meadows said: “It's a mixture [of good and bad news] and there are some clarifications needed.

“For those who are working or self-employed, it means that you'll have to justify a certain level of resources for the first time – previously you'd have been required only to show that your work was 'genuine and effective'.
“If you receive [disability benefit] allocation aux adultes handicapés it's also good news, as it means that you won't have to justify sufficient resources at all.
“There is, though, one thing that we need clarity on. Taken literally, the wording of the relevant article of the decree (Article 11) implies that you must 'have' sufficient resources, not that you have to 'have had' them for 5 years as you would for an EU carte de séjour permanent or for a regular carte de résident longue durée.
“We want to get more clarity on this and an understanding of what's intended, so we'll be taking this up as soon as possible with the Ministry of the Interior. Until then, please don't read too much into this, and continue to put your dossiers together to cover a 5 year period.”
The decree was published on Wednesday morning on the Journal Officiel – where all French laws and decrees must be published before they come in to force – and applies only in the case of a no-deal Brexit.
The conditions also only apply to people who are legally resident in France on the day that Britain leaves the UK.
For RIFT's full breakdown of the decree, visit their website here.