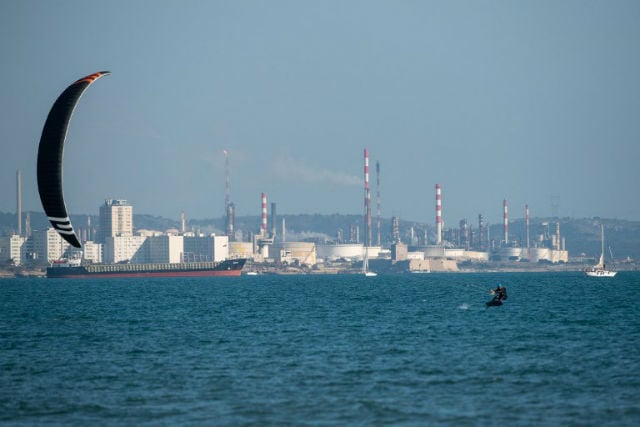 Alberic Dubray, 34, practices kite foil, with a refinery in background in Fos sur Mer. Photo: Christophe Simon/AFP
Environmental concerns are expected to be a major issue in the European Parliament elections in May, when analysts say green parties could score better than they do in national contests.
Yet anti-pollution activists say that despite EU claims of having the toughest standards in the world, its actions are far too feeble against places like Fos-sur-Mer, home to dozens of oil refineries, chemical factories and steel companies.
“I'm fed up with the European Union — what are they waiting for to raise awareness about this?” said Daniel Moutet, who has spearheaded the campaign to force Fos-sur-Mer to clean up its act.
Rates of cancer and chronic diseases are higher in this area than the average in France — last year Moutet was diagnosed with diabetes, which he believes could be linked to the dire air quality.
In March 2018 the regional health agency (ARS) acknowledged that the health of residents of the area had been hit by the pollution levels. A year earlier an independent study concluded that women questioned in the area had cancer levels three times higher than the national average.
12 years of warnings
According to Moutet, mercury, benzene, sulphur and nitrogen oxides are all part of that toxic cocktail along this stretch of the French Mediterranean coastline.
Last May, the European Commission took France and five other countries to the European Court of Justice for failing to apply long-sought steps to improve air quality.
In France's case the move came after 12 years of warnings over fine particles as well as nitrogen dioxide levels which in some cities were more than double EU limits.
Some residents have learned to live with the fumes belching from the Fos-sur-Mer chimneys.
“The white ones are just steam,” said Martine Monnier, 65, enjoying the spring sun on a beach just a stone's throw from the site. “But there are also red ones and yellow ones, those are more dangerous. We know how to recognise them.”
'Cocktail effect'
According to France's public health agency, fine particle pollution alone is the cause of 48,000 premature deaths in the country each year. To ensure the EU's pollution limits are met, countries are supposed to impose — and enforce — strict emission limits for industrial sites like Fos-sur-Mer.
Some progress has been made: A study released in March showed a marked decline in atmospheric concentrations of mercury since the 1970s in response to tougher rules.
And the Esso refinery, for example, which produces seven million tonnes of petroleum products a year, says it has cut its sulphur emissions in half over the past 10 years, while reducing nitrogen oxide emissions by two-thirds.
“There are lots of spot checks” by state inspectors, the site's director, Stefaan Van Severen, told AFP. “We've gotten our environmental footprint under control.”
Such claims fail to persuade the EU's critics in Fos-sur-Mer and nearby Marseille, where there is also shipping traffic and a heavy reliance on cars because of limited public transportation options.
A recent report by Greenpeace and the Respire (“Breathe”) advocacy groups found that a quarter of Marseille's schools and daycare centres are in areas where NO2 levels exceed EU thresholds.
EU has 'very little power'
Rene Raimondi, who was the Socialist mayor of Fos-sur-Mer for 14 years before stepping down last year says he is “a little disappointed” that the EU has “very little power” when it comes to the environment.
“France has been convicted several times by Europe over fine particles, but afterwards nothing ever happens,” he said.
A case in point is the steel giant ArcelorMittal, which was targeted in late 2018 for excessive runoffs of benzene, a known carcinogen, at Fos-sur-Mer. Critics say the fine of just 15,000 euros ($16,850) was unlikely to have any meaningful impact on the operations of a company with an annual turnover in the billions.
ArcelorMittal Europe CEO Aditya Mittal says the group is cleaning up its act at Fos-sur-Mer.
“We are obviously making additional investment and we plan to solve all these problems by the end of April this year,” he said.
The European Commission's representative in Marseille, Alain Dumort, said Brussels will fulfil its role as the guardian of Europe's air quality. He pointed to the Commission's warning to Paris in January to enact several EU directives into French law, a first step toward legally binding infringement proceedings.
The EU is also financing a seven-million-euro research project aimed at capturing the industrial gases emitted at Fos-sur-Mer and using them in the production of insulation products and plastic films.
But the eventual results of the four-year project might not be enough to convince Fos-sur-Mer residents of the EU's effectiveness, less than two months from the European Parliament elections.