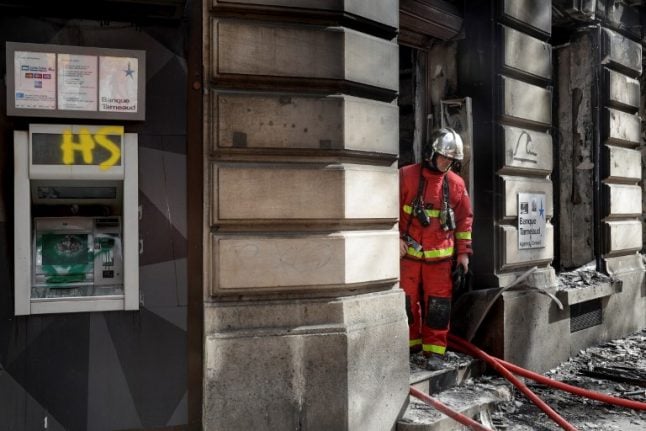 Banks have been frequent targets during the yellow vest protests. Photo: Geoffroy VAN DER HASSELT / AFP
Since the “yellow vest” anti-government protests began in November, more than 760 banks have suffered damage.
“It is time for all to condemn acts committed against banks,” the French banking federation's executive committee said in comments published in the daily Le Monde.
“Yellow vest” demonstrations are expected Saturday in several French cities despite bans in hotspots such as the Champs-Elysees avenue in Paris and the centre of Bordeaux.
READ ALSO:
Banks have often been the targets of vandalism and arson during the protests, and last week 11 people were injured when a Banque Tarneaud branch was set on fire near the Champs Elysees.
“We must quickly put a stop to this unbridled and unjustified violence,” the federation said.
It called for order to be restored “so that our colleagues and shopowners can work safely” and meet their clients' needs. The call was echoed by the police union Alliance, which told AFP Saturday its members “were fed up” with critics that sought to blame them for the violence.
“Our duty is to maintain public peace, even if that sometimes means restoring public order,” Alliance secretary general Frederic Lagache said.
The banking federation's executive committee comprises the bosses of six large French banks; BPCE, BNP Paribas, Credit Mutuel, Banque Postale, Credit Agricole and Societe Generale.
“For a little more than four months, hundreds of local branches that are essential links in local life… have been targeted, vandalised, pillaged and burned, and bank officers physically threatened,” the federation said.
With taxes a key trigger in the initial protests, it said French banks were the primary contributor to fiscal revenues, paying €644 euros for each €1,000 in net profit, excluding social charges.
France counts 37,000 bank branches and the sector employs more than 360,000 people.