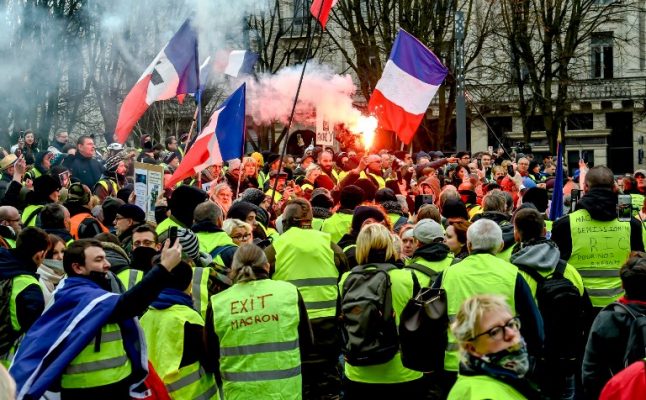 Are the “yellow vest” protests continuing this weekend?

Yes, this weekend marks 'Act XX' in the long-running protest, which has periodically flared up into violence. Although the numbers of people at recent protests has shrunk dramatically from the estimated 284,000 seen when protests began in November, the movement is still going and marches and protests are expected on Saturday around the country.

So what's happening this weekend?

A number of protests have been announced on Facebook, in cities including Paris, Toulouse and Rouen. There are also marches and demonstrations planned in a number of smaller centres including Montpellier, Limoges, Dieppe, Quimper and Epinal.

On Facebook a 'national appeal' has been launched to gather in the southern town of Avignon. Organisers describe it as “a national gathering in Avignon on March 30 for more fiscal justice, social, more democracy and a real change for the environment without taxing us for that!”

Local government officials have reacted by announcing the temporary closure of the railway station and banning large gatherings. The town's historic Papal Palace, where the protesters are invited to meet, is to be given extra protection.

READ ALSO: The burning of the Champs-Elysées does not mark a new beginning, more like a last hurrah' Rioters looted and burned stores on the Champs-Elysées in Paris on March 16. Photo: AFP

This week “yellow vest” organisers applied to be allowed to demonstrate on the Champs-Elysées again, but permission for that has not been granted and the famous avenue will remain off limits to marchers on Saturday.

Instead, “yellow vests” are inviting people to gather in the Place de la Bastille.

Are there other bans in place?

Yes, several places have been declared off-limits to protesters. In Toulouse the Place du Capitole is off limits to protests, while in Rouen protests in the city centre are banned, as they were last week.

In Bordeaux large parts of the city centre have been placed off limits to protesters after the mayor said he had information that “there will be hundreds of hooligans and people who are spoiling for a fight”.

Mayor Nicolas Florian asked people to remain in their homes on Saturday and told shop owners to shutter their stores. Are there any other places I should avoid?

It's difficult to predict exactly what will happen this weekend. Certainly last weekend was noticeably calmer than previous weeks, and the number of demonstrators across the whole country fell to an estimated 40,000. But how much of that was due to the huge security presence – particularly in Paris – is difficult to say.

Extra closures may well be announced on Saturday morning, you can check the RATP transport site here.