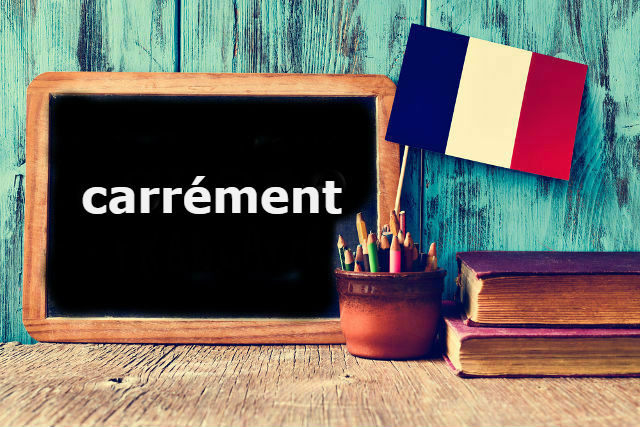 Why do I need to know carrément?
The nifty French word regularly crops up in conversation, often on its own as a reaction to something.
Once you know what it means, carrément is one of those colloquial French word you'll start using all time because it's so handy and it will effortlessly make you sound native.
So, what does carrément mean?
Carrément is an adverb that can loosely be translated into English as 'really', 'completely' or 'absolutely'. It can be used in a sentence or on its own, as it often is, often emphatically.
For example:
Il est carrément fou! 'He's completely mad!'
Elles vont carrément faire ca? 'Are they really going to do that?'
Tu vas vraiment l'inviter a ta fête? Carrément! 'Are you really going to invite her to your party? Absolutely!'
It also means 'squarely' but you won't hear carrément used in this way nearly as often.
Where does it come from?
The word is thought to have first appeared in French in the 13th century.
In French a carré is a square and although carrément doesn't really have anything to do with this geometric shape, it is probably loosely related in the sense of square being a bold, solid shape.
Other than that, in French, if someone is described as being carré, this can also mean 'straightforward' or 'no-nonsense'. It's not hard to imagine how all these words derived from the word square.
More examples:
Il fait carrément chaud! 'It's really hot!'
Allez, vas-y carrément! 'Come on, just go for it!'
Les manifestants ont carrément defié la police. 'The protesters completely defied the police.'
For more French Expressions and French Words of the Day you can CLICK HERE to see our full list