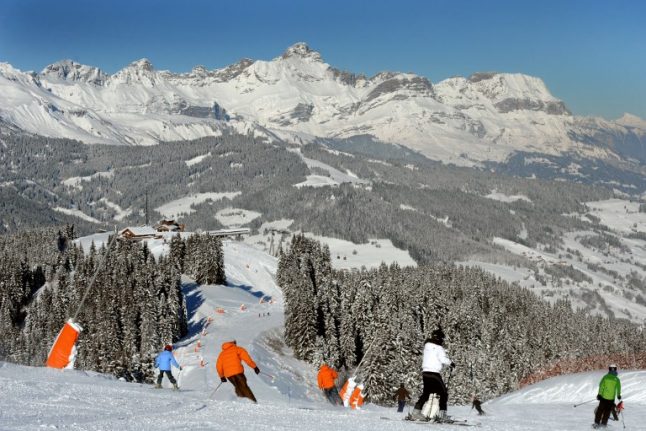 The fire broke out at a hotel in the ski resort of Megève. Photo: AFP

Seventy firefighters were battling the blaze overnight on Thursday at the Four Seasons hotel.

According to local radio station France Bleu, 63 residents and 120 members of staff were evacuated after the fire broke out in the six-storey building.

The blaze was discovered on the wooden roof of the chalet-style Four Seasons hotel at around 10pm on Thursday, and 70 firefighters worked throughout the night to bring the fire under control by Friday morning.

Officials said the building's fire alarms did not go off immediately, but guests and staff at the site were outside the building even before firefighters arrived.

Evacuees are being housed elsewhere during the investigation into the cause of the blaze, which local newspaper Le Dauphine Libere said might have been started by a chimney fire.

The five-star hotel, whose restaurant holds two Michelin stars, belongs to the Rothschild family, which began developing Megeve in the 1920s to rival the luxurious St. Moritz in Switzerland.

It was the second major fire to strike a French Alps ski resort this winter, after a suspected arson attack at a residence for seasonal workers in Courchevel in January left two people dead.

On Tuesday, sources close to that investigation said a man was arrested this week for questioning.

The man, in his 30s, was seen by several witnesses in Courchevel when the fire occurred and was arrested on the France-Spain border by police investigating an unrelated case, according to a report by RTL radio.