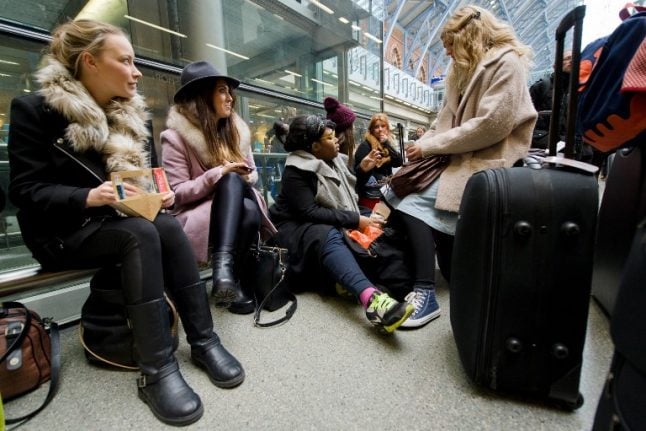 Passengers have been facing long queues since March 4. Photo: AFP

Should I travel at all?

For most of the month of March, Eurostar was warning against all but essential travel from Paris. That warning was lifted on April 3 and the official advice is currently to travel, but be prepared for delays in Paris.

In March passengers were reporting queues lasting up to six hours. In recent weeks the length of the queues had dropped, although that seems to be because more and more passengers are taking Eurostar's advice and staying away. Queues at present are being reported at between an hour and 90 minutes.

Should I turn up at the station as normal?

Eurostar's advice on when to turn up has fluctuated throughout the issue, and there is currently no official advice. However Gare du Nord's station master has advised that queues are at about 90 minutes on Monday morning. If you miss your scheduled departure while you are queuing, you will be moved to the next available service.

And importantly passengers are also advised to use the toilets in the main Gare du Nord concourse before going through to the Eurostar terminal, to avoid getting caught short.

Will my train even be running?

At the height of the protests, several trains per day were cancelled. Eurostar is currently listing all trains as running, although there are significant delays on some services. However, if the protests continue there could be more cancellations.

Passengers are advised to check here before they travel.

Can I claim compensation?

Eurostar will only offer compensation if your journey is delayed by more than one hour. The company asks people to wait 24 hours after the journey before making a claim. The form to claim compensation can be found here.

Note that the amount of compensation you can claim increases depending on how late your train was.

So when will it be over?

The problem for Eurostar is that the work-to-rule protest by French customs staff – which began on March 4 – is currently open ended. The union is asking for extra pay to justify the extra checks they will have to do when Britain leaves the EU. But one union official told The Local that the government is not talking to them, so there is no end date in sight for the industrial action.

Find out more about the ins and outs of the dispute here.