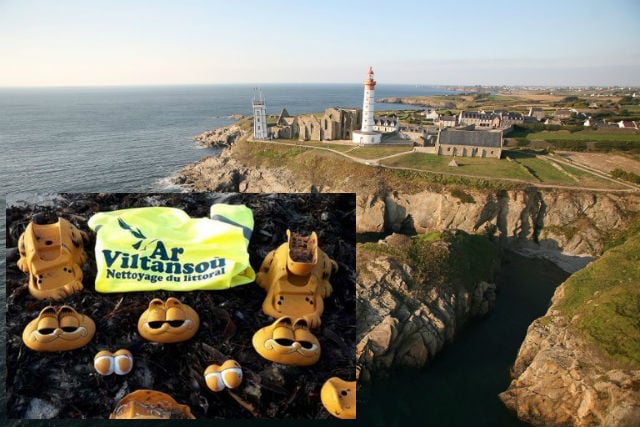 Plougonvelin, one of the villages where the telephones wash up. Photo: AFP

Last year alone around 200 pieces or entire phones were found on the same 24-kilometre stretch of coast in the Bay of Brest.

They have been arriving there regularly for the past 30 years.

One theory is that a container of the bright orange devices – which today sell for up to 40 euros on eBay – may have fallen from a ship in the 1980s. Whenever a storm moves the sunken container on the seabed, some phones are released and washed ashore by currents.

But the Paws company that today holds the Garfield licence told FranceInfo news website that it was unaware of any such container containing its products being lost at sea off the French coast. The fictional cat Garfield was born in 1978 and is hugely popular worldwide. Photo: AFP

A Breton farmer has perhaps lifted the lid a little on the mystery, after telling the Télégramme newspaper that he remembered a container washing ashore in the 1980s that contained Garfield phones.

The remains of a container are still to be seen at the same rocky spot, the paper reported.

But it appears now to be empty of any products and locals believe it cannot be the source of all the phones that wash ashore.

“It never stops,” said Claire Simonin Le Meur, president of local association Viltansoù that conducts regular beach cleaning in the area and which logs the type of waste material that is found.

“At each (beach) clean, we collect three or four telephones, either complete or in pieces,” she told France Info.

The phones, with eyes that open and close when the receiver is lifted or replaced, do not float and are about 30 centimetres long.

They are often in good condition when picked up on the beaches of Plougonvelin and Ploumoguer, near the city of Brest.

Local environmentalists keep them as evidence of ocean pollution.