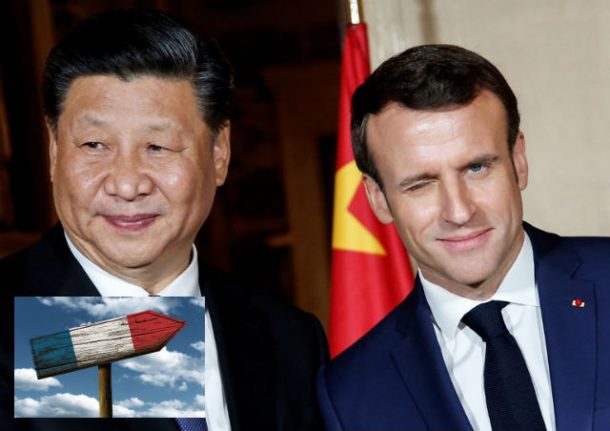 Chinese President Xi Jinping and French President Emmanuel Macron were due to hold talks in Paris on Monday with the host leader seeking to forge a united European front to contend with Beijing's advances.
Xi's official visit to Paris will mark 55 years since Charles de Gaulle established diplomatic relations with Beijing. A series of cooperation deals on nuclear power, aerospace and clean energy initiatives, some involving lucrative contracts, are expected to be signed.
The new trial of Abdelkader Merah, brother of Mohamed Merah, a jihadist who shot dead seven people, including three French soldiers and three Jewish children, in 2012, will begin in Paris on Monday.
Abdelkader originally went on trial in 2017 to decide whether he was complicit in the killings carried out by his brother.
Tuesday March 26th
Macron is set to welcome Chinese leader Xi Jinping, German Chancellor Angela Merkel and President of the European Commission Jean-Claude Juncker to discuss business, trade and climate change at the Elysee Palace on Tuesday.
French MPs will vote on the new health bill.
Parts of the bill have provoked an outcry among some doctors who believe some measures would mean a denigration of their profession. Photo: AFP
The new Galeries Lafayette building will open on the Champs-Elysees in Paris on Tuesday, with Minister of the Economy and Finance Bruno Le Maire in attendance.
Wednesday March 27th
French Prime Minister Edouard Philippe will be Qatar on Wednesday where he will open the country's new museum in the country's capital, Doha.
The French court of appeal will rule on the case of drug dealer and 'Isis landlord' Jawad Bendaoud for making death threats to one of the victims of the November 13th 2015 terror attacks.
The Louvre-Lens in the Pas-de-Calais will open of one of the biggest exhibitions to ever take place on the Greek epic poet Homer on Wednesday.
The Salon du Dessin (Drawing Fair) opens in Paris on Wednesday and will continue until April 1st.
The Salon du Dessin has an international reputation, and collectors, specialists, curators, scholars and connoisseurs from all over the world take part in the event.
Thursday March 28th
Dominique Libault is set to deliver his report on the elderly in France to France's Health Minister Agnes Buzyn on Thursday. Photo: AFP
Friday March 29th
What could be Friday's biggest news item isn't set to take place in France but it would affect many people living here.
Friday March 29th could be the day Britain leaves the EU although even at this late stage, no one is certain, as it looks less and less likely that British Prime Minister Theresa May's Withdrawal Agreement will pass in Parliament this week.
Friday marks the beginning of the 15th annual International Festival of crime fiction in print and film in the French city of Lyon.
The festival runs from March 29th – March 31st.
A French court will deliver its verdict on controversial 'yellow vest' protester Eric Drouet who has been accused of organising a central Paris protest without declaring it.
Friday also marks the 30th anniversary of the famous Louvre pyramid. Photo: AFP
Saturday March 30th
Saturday is your last chance to catch the exhibition of Vivian Maier's photographs at Les Douches La Galerie in the 10th arrondissement of Paris.
Vivian Maier was an American street photographer who worked for about forty years as a nanny, pursuing photography during her spare time, whose work was only discovered after her death.
Sunday March 31st
Women's Carnival, Paris, March 31st
Just because the Women's Carnival in Paris is smaller than the one in Nice doesn't mean it's any less fun. Women are supposed to dress up as queens and while men are welcome as well they need to dress up as a woman.
So better get your crown ready or start rummaging through someone else's closet to find the perfect outfit. However costumes are not obligatory.