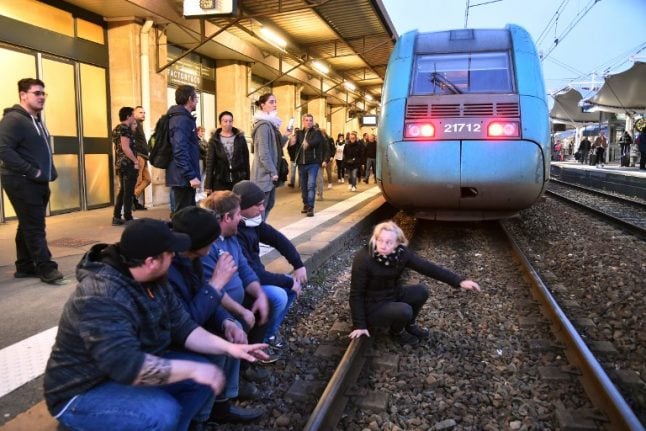 Fairground workers protest in Le Mans. All trains between Paris and the South West of France have been halted. Photo: AFP

UPDATE: SNCF says the tracks have now been cleared and services are slowly returning to normal, although there are likely to be delays for some time

Protesters who are understood to work at the Arjowiggins paper factory – which is threatened with closure – have occupied the platforms at Vendome town station.

The town lies on the high speed Atlantique route from Paris to south west France, and French train operator SNCF said it had been forced to cancel all trains through Vendome since 11.20am on Monday.

The operator said that 24 trains have so far been cancelled, affecting up 12,000 passengers.

It added that police were in the area of the station attempting to establish order.

According to French TV station BFMTV, three factories are potentially facing closure as a result of the company's troubles, affecting more than 800 jobs.

Separately in nearby Le Mans, there were violent protests as fairground workers clashed with police.

Rail traffic through the town was also halted after protesters blocked the tracks. Around 300 members of the fairground community – some masked and hooded – were involved in clashes with riot police in the centre of Le Mans; while others blocked train platforms and a section of the motorway.

The dispute is understood to be over the siting of a popular French fairground.

The town council declared that the fair had become too big and too noisy for the town centre, and created a new site on the outskirts of the town.

But furious fairground workers have rejected the new site, saying it is a “soulless car park”. Interior Minister Christophe Castaner tweeted: “Nothing can justify the abuses committed this morning at Le Mans.

“Our forces have faced attacks of unheard-of violence.”