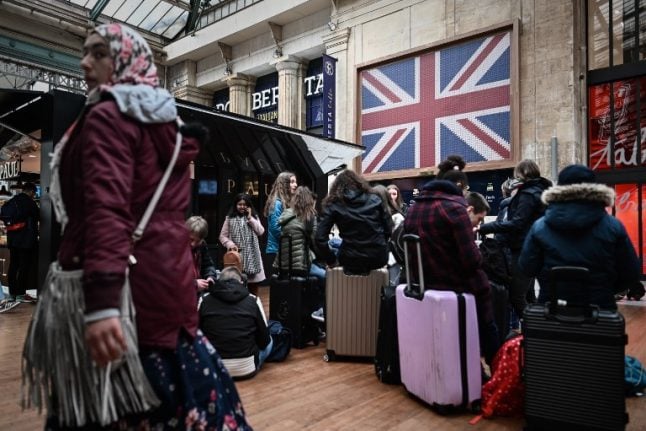 Illustration photo: AFP
Eurostar passengers faced yet another day of travel misery on Thursday as French customs officers continued their protest, which they say is aimed at showing the regular kind of chaos at customs checks that will happen after Brexit – as well as improving their pay and conditions.
While the queues did not appear to be as long as they have been in recent days and weeks, passengers were still being told they could be waiting for up to four hours and have been warned “only to travel if necessary”.
Those travelling on trains later in the day have been facing longer queues and the protests are set to continue until at least March 24th.
One passenger who had just joined the end of a growing queue said that she had received text messages from Eurostar to inform her about the delays but that she was furious about what was going on.
READ ALSO:

The queues are growing at Gare du Nord in Paris as Eurostar passengers are delayed due to the French customs industrial action. But it's looking more organised than when I was here a week ago. #Eurostar pic.twitter.com/jjsFVXB93j

“With the 'yellow vest' protests at the weekend and now this, I don't know how people put up with it,” Inge Cantegreil, a Dutch psychiatrist living in Paris, told The Local. “People here are so childish.
“They want to have something and they say they have to have it now, without thinking about other people,” she said, adding that she had no choice but to travel because she was due in London for a conference.
Inge also that in future she would consider flying rather than using the Eurostar.
Others went further and said not only would it put them off using Eurostar but it would even prevent them from coming to France again.
“We've been to France now but we won't do it again,” said Rose Smith, who was booked onto the 1 pm train with her husband.
“You don't know whether to wait and queue now or come back later,” she said. “We wouldn't come back [to France] or use the Eurostar again.”
However not everyone was quite so angry about the situation, many of those we spoke to said they knew it wasn't the fault of Eurostar.
“It's France, it's been like this for 25 years, so you have no expectations but no frustrations either,” said Roland Giscard d'Estaing, who has been living in London for 22 years.
“You learn to adapt,” he said, adding that he had been notified by Eurostar that there would be delays via text message.

But some said the delays had not put them off using the Eurostar because it was down to a one-off situation: Brexit.
“The Eurostar staff are doing their best in a difficult situation,” Mark Lawrence from Surrey, who travels to Paris regularly for work, said. “It wouldn't put me off using the trains again because it's so much better than flying and this is a result of Brexit, which is a very unique situation.”
Another passenger from Australia, who was in Europe on holiday, said the delays “wouldn't put him off Eurostar but did put him off French customs.”
The work-to-rule protest began on March 4th and as originally scheduled to finish on March 20th, but has now been extended until at least March 24th.
“I completely understand the frustration of the passengers and I'm very sorry for them,” Vincent Thomazo from the UNSA union told The Local.
“But the government aren't responding to us at all so we have to put pressure on them.
“We don't have any concrete information on when it will end — we''ll have to wait and see but we are hoping it won't go on beyond the end of the week.
“The situation is tiring for everyone including those carrying out the industrial action.
“We're hoping to hear that government is willing to give us what we need by the end of the week and we really hope the action will not continue into April and beyond.”
Eurostar declined to comment on the impact the industrial action had on the company, saying: “At the moment our focus is on offering customers flexibility around when they travel during this industrial action.
“For the moment, we continue to advise travellers with bookings in the coming days not to travel unless absolutely necessary. Customers can exchange their journey at no cost, or refund if they would prefer. Those with bookings in the future should check our website for updates.”