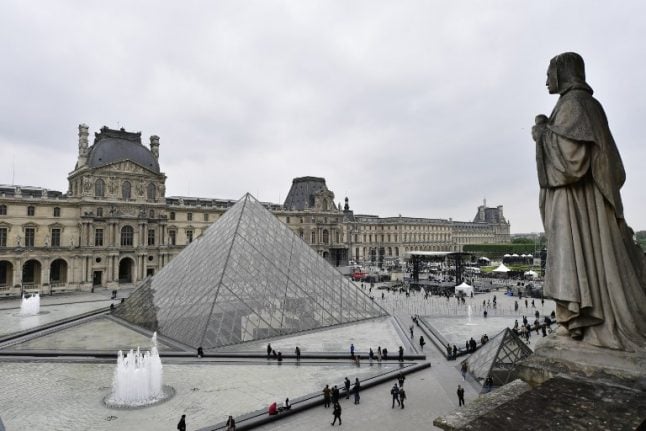 Photo: AFP
The show about the booming art market in occupied Paris, when more than two million objects went under the hammer in a frenzy of forced sales and looting, has turned up works by Delacroix and Forain taken from the family by the collaborationist French Vichy authorities.
Curator Emmanuelle Polack discovered that the Louvre bought a dozen works seized from the Dorvilles while researching a new book on how Jewish families
and some of the most important dealers in modern art were plundered.
The paintings are still in the French national collection, with three loaned to the Shoah Memorial museum in Paris for the show.
Three more works taken from the family — most of whom perished in Auschwitz — have turned up in the Gurlitt hoard of 1,500 Old Masters, Impressionist and Cubist works found in a Munich apartment in 2011.
Despite decades of pressure to restore works to their rightful owners, Polack told AFP that there had yet to be a proper audit of the works acquired by the French national collection during the war.
“We need to look at their provenance very calmly and scientifically to lift all suspicion over them. It is hugely important that this is done,” she said.
France's Prime Minister Edouard Philippe  — who visited the museum Monday — boosted the investigative powers of a commission which awards compensation
to victims of Nazi looting last year after criticism of the slow pace of restitution more than 70 years since the end of World War II. French Prime Minister Edouard Philippe at the Shoah museum in Paris on March 18th. Photo: AFP
'Amnesia'
In January, Polack helped return a painting plundered from the home of France's heroic pre-war interior minister Georges Mandel, a man Winston Churchill hailed as “the first resister”.
Mandel, who refused to flee to London with Charles De Gaulle after France fell in 1940, was murdered by members of the French collaborationist “Milice” militia a month before Paris was liberated by the allies in 1944.
The portrait of a young woman by Thomas Couture was returned by the German government from the Gurlitt trove.
Polack told AFP that the free-for-all auctions during the war “utterly changed” the Paris art market, then the biggest in the world, and has been cloaked for decades behind “a kind of amnesia”.
“Major players whose suspect practices helped them flourish during these dark years were rarely investigated,” she said.
Some art world dynasties rose during the war while others never recovered.
The exhibition shows how the pillage was pre-planned, with galleries sealed off by German troops after the French capital fell in 1940, and the premises of its most famous modern art dealer, Paul Rosenberg, seized and turned into the Institute for Jewish Affairs, which pumped out anti-Semitic propaganda.
More than a third of Rosenberg's 162 seized paintings are still missing, including works by Picasso, Degas and Matisse. Photo: AFP
Greed and treachery
Another legendary gallerist Rene Gimpel, who joined the resistance, was denounced by a rival dealer Jean-Francois Lefranc and died in a German concentration camp.
Others were forced to “aryanise” their businesses, like Pierre Loeb, who had to hand over his gallery to his colleague Georges Aubry.
But as the exhibition shows, when the war was over Aubry refused to give it back until Picasso — a communist who had remained in France throughout the war — forced him.
Polack said she was now working to help the family of collector Armand Dorville, who had given works to French museums before the war and had intended to leave more in his will.
“It is not just about getting paintings back, it is about grief and acknowledging the terrible injustices of the past,” she said.
“Confiscating art works was part of a process which started with people being demonised, excluded from professional life, then pauperised when their bank accounts were seized before finally being deported for extermination in the camps,” Polack insisted.
The paintings they were deprived of could have helped buy their escape, so “they were caught in a trap”, she said.
Prime Minister Philippe did not refer to the often drawn-out legal process of restitution during his speech at the museum, but promised to double state funding for the memorial from next year.
Polack said she was encouraged by the attitude of the Louvre.
“I think lending the three works to us (for the show) is a very big step and there is a good dynamic. They know the context and they know we need to work together to do everything properly to solve this problem,” she added.