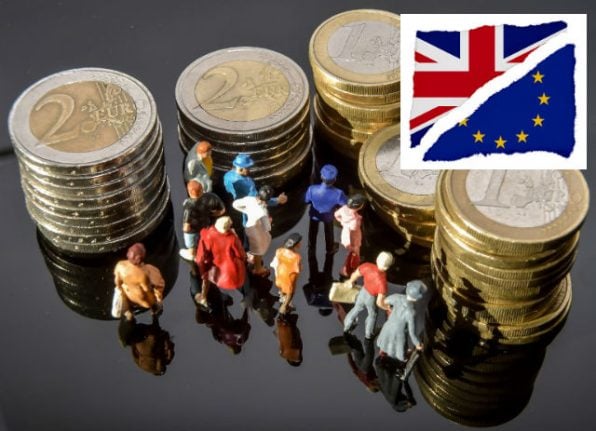 As Brexit inches closer, many British people living in France are nervous about having to reveal their income to French authorities in order to gain a residence permit.

Their fear is that the amount they earn won't meet the minimum resources necessary to qualify for Carte de Séjour in France and that as a result they will be kicked out of the country.

“I'm worried in case it is refused. What would I do then?” one 66-year-old reader, who has been in France for over 16 years told The Local.
One 64 year-old who lives in Cannes but asked not to be named said: “I'm retired in France on a small French pension of €80 a month. I have no savings and little income. I manage by getting work where I can.”
Another retiree Roderick Darby, who has lived in a small town in the Tarn for the last 13 years said: “I'm retired with small pensions totaling €410 per month. I'm worried that's insufficient”.
The question is what will be “sufficient” after Brexit? For the moment we just don't know.
What we do know is that whether Britain leaves the EU with a deal or without one, British people living here will have to gain a residency permit, meaning they will have to prove they are in France legally, which means showing they have “sufficient resources” not to be a burden on the state.

However, what we don't know is what the minimum requirements will be in either a deal or no-deal scenario. For a no-deal scenario these are set to be announced in a decree that will be released by the French government. We do at least have some guidelines to go on.

At the moment, the income requirements to qualify for a Carte de Sejour for the British, and other nationalities belonging to the EU, vary according to your situation.

“We hope that the amounts used for current residents will be those carried forward into the decree, but obviously don't have certainty on that,” Kalba Meadows from Remain in France Together told The Local. “As to how closely they stick to them … it's complicated!”

You can see the full list for those under 65 in the table below from the official government website. If you are over 65 and live alone you must bring in at least €868.20 or €1,347.88 as a household if you live with your partner. These income requirements can also be found on the government website.

The Local has contacted the Interior Ministry several times for confirmation on when the decree announcing the limits will be released however they have so far been unable to do so.
Kalba Meadows from RIFT also said she was hopeful that people's applications would be treated on a case by case basis, although she added that she couldn't be sure this would happen.
“This is something I've talked to the Ministry about a lot and their view is clear – as the Directive, the circular and the guidelines all say the question of sufficient resources can't be dealt with in a blanket way but must be decided on a case by case basis. That doesn't, though, always happen,” she said.
The official Ministry guidance to préfectures states that personal circumstances must be taken into account when determining whether somebody is likely to represent a 'burden on the state”, explains an article on the Remain in France Together site.
“For example, somebody with no mortgage or living rent free is likely to need a lower income than somebody in a large rented house with high outgoings, and an amount will be notionally added to your resources to reflect this.”
Those who don't have a healthy income but have resources from elsewhere such as savings and investments needn't worry as these are also taken into account by French authorities.
But another factor that will no doubt complicate matters is that prefectures around the country have a habit of acting independently and very different from each other.
“This is France and as all this is devolved to préfectures there is difference in treatment in different areas,” she said.
Campaigners from RIFT and British in Europe as well as the British Embassy in Paris have been making French authorities aware of just how many Brits in France are living on low levels of income.
When The Local asked Europe Minister Nathalie Loiseau about how many Britons feared they would not meet the “sufficient resource” requirements she said the government would look closely at the issue but added a warning.
“This is the case for citizens of all third countries. We have to make sure that they have sufficient means to stay in the country,” she said.
RIFT is urging Brits in France to do “the most important thing”, which is to “put together a clear statement of all your resources and how you live on them now, then back this up with evidence in your dossier.”
In other words it's best to be prepared for what comes next. Whatever that is.
Click here for the full article on Remain in France Together.