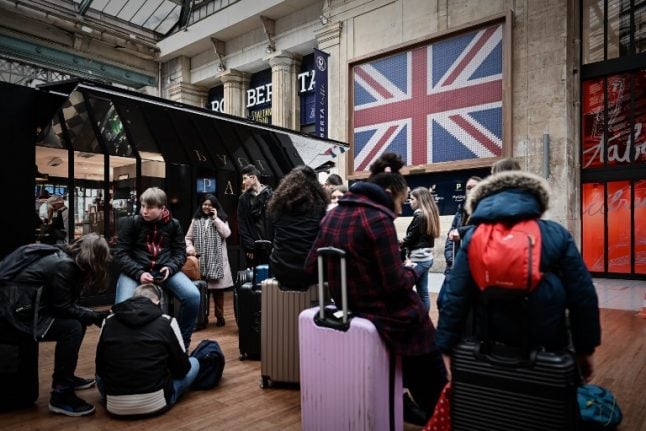 Passengers have reported queues of up to six hours at Gare du Nord. Photo: AFP

Eurostar has warned its passengers of another four days of queues and cancellations amid chaotic scenes at Paris' Gare du Nord station.

The company said: “All Eurostar trains are experiencing delays and long queues for journeys from Paris Nord due to industrial action by French customs until Sunday, March 24th.

“These delays impact our planned timetables and cause subsequent cancellations.

“We recommend not to travel unless absolutely necessary.”

READ ALSO: What is the French customs protest all about?

“If you do still need to travel please proceed to the ticket gates at the time indicated on your ticket. We will then do everything we can to accommodate you onto the next available service.”

Passengers have reported queues of up to six hours at Gare du Nord as the work-to-rule protest continues. (There are long waits at Gare du Nord. Photo: AFP)

> Arrive 90min before departure
> Be very patient, long queue times
> Use main station toilets before arriving on our mezzanine

The industrial action has caused traffic havoc over the last two weeks for Eurostar passengers at Paris Gare du Nord and Lille Europe, the port of Calais and the entrance to the Channel tunnel which links France and Britain.

The reason behind the industrial action, which began on March 4th, is customs officials are trying to press demands for higher pay and demonstrate what will happen if greater controls are put in place once Britain leaves the European Union, planned for later this month.

The customs agents are demanding an increase in overnight pay, a danger allowance, and more staff and resources to help with greater controls that will be put in place once Britain breaks away from the European Union, currently scheduled in just over two weeks.
French unions representing the around 17,000 workers last week rejected a €14 million budget boost offered by the government as it was “not sufficient compared to the agent's demands”, Jean-Marc Jame of the CFDT union told AFP.
“When divided by the number of agents, there is not much left,” he said.
Eurostar has also announced a reduced timetable for “operational reasons” until the end of March.