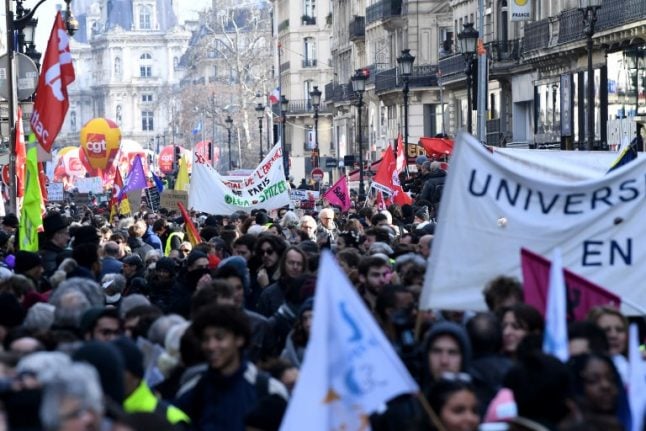 Illustration photo: AFP
The CGT will be joined by the left wing FO union as it takes to the streets with the aim of galvanising the social movement and to protest low spending power, with both private and public sector workers expected to take part.
Education workers union, the FSU will also be taking part, along with student unions, including the UNEF and UNL (high school students), with their members protesting over the latest education reforms (more below).
In Paris, there will be a march from Boulevard Saint-Michel on the Left Bank to the Champs de Mars by the Eiffel Tower in the 7th arrondissement, starting at 1pm.
Head of the far left CGT union Philippe Martinez will take part as will the head of the FO union Yves Veyrier.
“We are determined to mobilize because we do not want to be spectators or give backing to decisions that are being made on social issues as a result of the Grand Debat (national consultation),” Veyrier told the French press. Photo: AFP
Schools
If you have children in school you could be among those most affected by Tuesday's strikes.
Primary school teachers are required to announce in advance whether or not they intend to participate and according to France's main union for primary school teachers SNUIPP-FSU, four teachers in ten plan to join the action.
The teachers “have seized this day to protest the direction educational policy is taking,” said Francette Popineau, general secretary of the SNUIPP-FSU union.
The recent education bill, voted through the French parliament in February, gives no additional funding, “except private schools,” she adds.
Meanwhile, according to reports, it was difficult to tell how any secondary school staff intended to take part because unlike primary school teachers, they are not required to announce whether or not they will be in advance.
Transport
Transport could be slightly affected by the day's events, with Paris transport operator RATP saying “traffic will be almost normal for buses and will be normal for the Metro, the RER and trams.”
Meanwhile France's national rail company SNCF has said “there will be no impact, traffic will be normal everywhere, including the regional TER trains.”
Outside of Paris public transport is likely to be more affected, particularly in Strasbourg in the east and Clermont-Ferrand in central France, as well as other cities.
If you're flying you may find that your journey is delayed, with 20 to 30 percent of the air traffic controllers set to be on strike on Tuesday.
France's aviation authority, the DGAC has not cancelled flights but has said it believes there will be delays.
Other sectors
The health sector may also be impacted, with the CGT has filed a national strike notice with the Ministry of Health, which includes the national nursing organisation.
Job centre staff may also be on strike over planned job cuts.