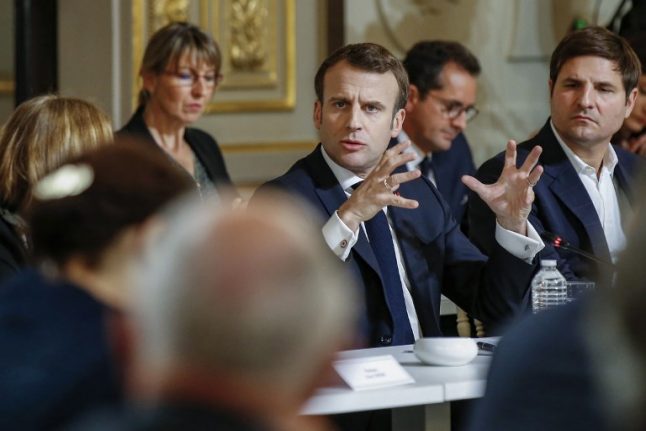 The president set himself a new personal record on Monday, speaking for eight hours and 10 minutes – finally finishing at 2.30am in a room that had slowly emptied of spectators and even some participants.

For two and half months, the 41-year-old has criss-crossed France for town-hall meetings as part of his “Great National Debate”, launched as a remedy to the anger seen in the “yellow vest” protests.

READ ALSO: What are the main gripes French people have with their country? (The Yellow Vest protests have thrown up a wide range of grievances. Photo: AFP)

Previous sessions had seen him show off his stamina, with the former  investment banker fielding questions from voters on issues ranging from hospital closures to foreign policy, often for four or five hours or more.

But on Monday night he surpassed himself talking in Paris for eight hours and 10 minutes, finally finishing at 2.30am in a room that had slowly emptied of spectators and even participants, some making their excuses before the end.

The title of the debate — “the main challenges and future issues that France will be confronted with” — set the tone for sometimes dense discussions at the presidential palace, which were broadcast on France Culture radio station.

Sixty intellectuals, economists and environmental scientists took part  with Macron, who won office in May 2017 promising to speak rarely to increase the impact of his declarations.

The “Great National Debate” was written off by some critics before it  started, but it has helped pull the centrist leader out of the worst crisis of  his presidency caused by protests which began in mid-November.

A poll published last Thursday by the Elabe survey group showed Macron's approval rating up eight percentage points since December, with 31 percent of voters having a positive opinion of him.

The “yellow vest” protests started over fuel taxes, but snowballed into a national revolt against Macron's governing style and pro-business policies.

He has repeatedly defended his record during debate appearances and again  made the case on Monday for highly contested tax cuts for the wealthy, which he introduced early in his term.

“We haven't sufficiently kept productive capital in France which creates  jobs,” he told the audience.