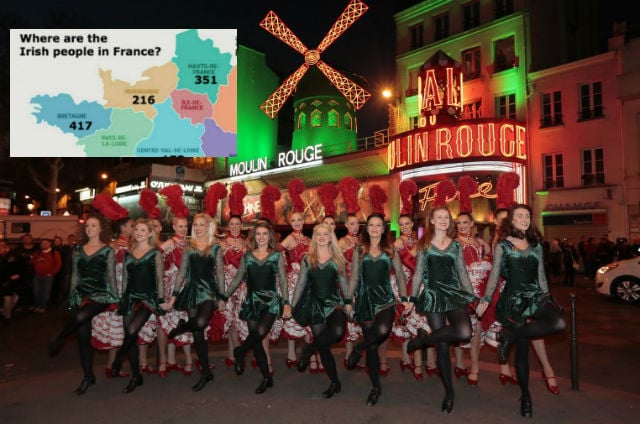 Did you know there are over 9,000 Irish people who live in France? That's officially at least. And with a huge number of Brits applying for Irish nationality due to Brexit, the number of “Irish” in France could soar in the coming years.

There are 9,086 to be exact, according to the most recent figures given to The Local from France’s Statistics Agency, Insee.

But where are they all? In short, they are spread all over the France from the capital to the countryside, although there are certain regions that have attracted more Irish than others. The sun might have something to do with it.

And according to one estate agent the “Irish buyers are back in love with France”.

“Property prices in the Republic of Ireland are booming again (12.3% increase last year) and owners are using their new found equity to buy in France again,” Mary Hawkins from Leggett Immobilier told The Local.
“Leggett Immobilier saw sales to Irish buyers triple in 2017 and this year shows no signs of being different.  The most popular regions, in order, are Poitou Charentes, Aquitaine and Normandy all of which offer excellent value for money.
“Most sales were in the €50-130,000 range but clients were buying a mixture of property – from a barn to renovate for €20,000 to Alpine apartments for over €1m.
“The median price in Dublin now stands at €330,000 which would buy you a superb family home, with pool and views out over the vines in Poitou Charentes. Throw in around 2,250 hours of sunshine every year and you can see the attraction.”

Here's a quick glance at where the Irish live across the country, followed by an in-depth look at all 13 regions.

The 9,086 Irish people in France isn't a bad score at all, high enough to rank it fifth of the eight English-speaking countries we’ve focused on (after Brits, Americans, Canadians and Indians).

And the Irish are spread around the country – they’re not all in Paris. In fact, just 29 percent are in Paris and its suburbs.

Other popular regions include Occitanie, Auvergne-Rhone-Alpes, and Nouvelle Aquitaine, each of which has over 1,000 people from Ireland. (See map below)

They are attracted by life in the capital

There are over 2,600 Irish people living in the Île-de-France region which includes Paris. That makes the region the most popular destination for Irish expats.

Just shy of 1,300, roughly half the Irish population of the Ile-de-France region, live within the péripherique ring road. In other words Paris. And Paris loves the Irish too. Not only are the hordes of Irish pubs but this year the City of Light held its first ever St Patrick's Day parade and every year on March 17th some of the French capital's most historic monuments turn green for the day (see the strange looking Sacre Coeur below).

Irish football fans had such good craic (fun) during the Euro 2016 tournament in France and in doing so made a big impression on their hosts that it's possible some fans never made it home and settled down with French partners. They don't care much for chateau country

In the huge region of Centre-Val de Loire you'll only find 173 Irish people, who are fairly evenly dispersed in the area's six departments. The top department for the Irish is Indre-et-Loire where 58 live, the rest have around 20 each.

There are even fewer Irish people spread across the Bourgogne-Franche-Comté region, with just 144 calling it home. The department in the region where you'll find the most is Saone-et-Loire, where there are 37, while Nievre has just two. The Irish avoid the north

You'll only find 351 Irish people in Hauts-de-France region. The most popular department is Oise with 121, followed closely by Nord with 113. But don't go to Somme expecting to find Irish pubs and flowing Guinness, there are only 13 Irish people there.

In neighbouring Normandy there are but 216 people from Ireland, very evenly spread across the region's five departments. Most are in Calvados (66).

And things aren't much better in the east

When it comes to the east, the Grand Est region can lay claim to be home to 367 Irish people, mostly lumped in Bas-Rhin (138) and Haut-Rhin (95). The rest of the eight departments are quite sparsely populated by the Irish. Meuse has just four, Vosges and Haute-Marne have four each, and Ardennes has but two.

This it must be said is a fairly similar pattern to other native English-speakjers who have settled in France. It seems central, northern and especially eastern France is not for them. Even though they are  some of the cheapest areas to live. Could it be something to do with the weather? The east especially can have some harsh winters.

Brittany in the north west is quite attractive for the Irish community with 417 Irish people calling the region home. That might not sound like much, but it's almost five percent of France's Irish community (compared to the 0.4 percent of the American community that lives in the same region).

This is likely because Brittany and Ireland are two of the world's six “Celtic Nations”, places where the Celtic language or traditions have survived. And as an added bonus, there are even direct ferry links between Ireland and Brittany. Below, members of the Rinceoiri Cois Laoi (from Ireland) parade during the Lorient InterCeltic Festival in Lorient, back in 2014.
Originally held in Brest, the InterCeltic Festival now takes place in Lorient and remains the key event for Celtic musicians and artists. Every year, thousands of artists and bands from Scotland, Ireland, Wales, the Isle of Man, Cornwall, Cornouailles, Asturias, Galicia and Brittany take part. As for the Irish residents, there are 131 in the department of lle-et-Vilaine, while the other three departments in Brittany have around 100 Irish people each.

In the neighbouring region, Pays de la Loire, you'll find 296 Irish people, ranging from 120 in the Loire Atlantique department to just 10 in Sarthe.

They flock to the south west

The huge region of Nouvelle-Aquitaine, which spreads from the Spanish border up to La Rochelle and into the heart of central France is home to 1,166 Irish expats.

That doesn't sound many compared to the 39,000 Brits but they number almost as many as the Americans in the region.

Charente and Charente-Maritime have 120 Irish people each, while the other nine departments have between 20 and 100. The top region (outside Paris) is…

Even more popular than Nouvelle-Aquitaine is Occitanie, with 1,266 Irish locals. There are over 270 in Herault and 341 in Haute-Garonne. Other notable departments are Aude with 165 and the Pyrenees-Orientales with 117. In fact, so popular is Occitanie that Ireland jumps into the third spot here, behind the UK and US.

The central region of Auvergne-Rhone-Alpes, which is home to France's second city of Lyon is home to 1,127 Irish residents.

In the department of Ain you can find 285 Irish people and Haute-Savoie home to Chamonix and the ski resorts of the northern Alps is also fairly popular with nearly 300 Irish living there.

The department of Rhône (240) comes in close behind. There are 135 in Isere, but just two in Cantal. The Irish mustn't care much for the cheese.

There are 900 Irish people (exactly) registered in the PACA region, with 487 in the department of Alpes-Maritimes, which has for a long time been hugely popular with English speakers because of the Riviera resorts of Cannes, Nice and Monaco.

In all there are some 8,500 Anglophones in the department. All sporting a nice tan no doubt.

There are 186 in Bouches-de-Rhone, and 126 in Var. The least populated department is Hautes-Alpes with just ten Irish locals.

There is only one Irish person in…

Spare a thought for the single, solitary Irish resident in southern Corsica. Whoever they must be well integrated. (Give us a shout if you read this.)

Things are slightly more populated on the north island with 19 Irish residents.

But Corsica, despite the being dubbed the Island of Beauty hasn't proved popular for any Anglophone expats, not just those from the Emerald Isle.

While Paris is clearly an attraction to the Irish who come to France, no doubt because of the potential jobs it offers as well as the beauty of the city, most Irish prefer the sunny south. Much in the same way the Brits do.