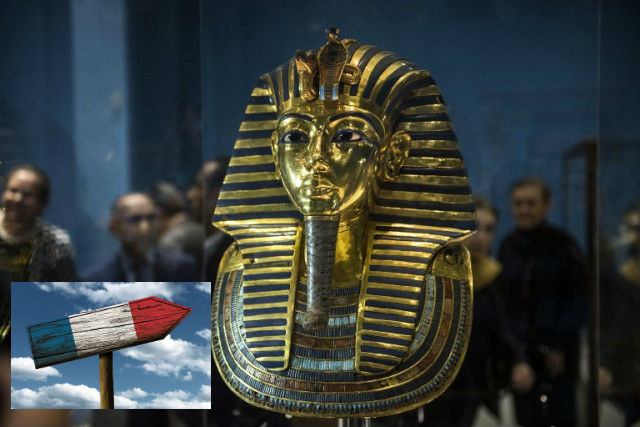 The ‘Tutankhamun, the treasure of the Pharaoh' exhibition will open in Paris on Saturday. Photos: AFP/Depositphotos

The meeting comes after violence unexpectedly flared at Saturday's protests, with 80 shops and businesses hit on the Champs-Elysées avenue.

French Cardinal Philippe Barbarin, who received a six-month suspended jail sentence for failing to report sex abuse by a priest under his authority, met Pope Francis at the Vatican today to tender his resignation.

The pontiff will decide within weeks whether to accept his resignation.

Monday marks the beginning of France's week to combat racism and anti-Semitism, with around 500 events set to take place across the country. Several unions have called for a day of strikes and protests on Tuesday, with workers in both the private and public sectors expected to take part.

Judges will deliberate on the verdict in the trial of Nick Conrad, a little-known French rapper who caused a furore in France with a music video called “Hang White People”.

The charge against him, of inciting deadly violence, carries a maximum five-year prison sentence and a fine of €45,000 (39,000 dollars).

The big event on Wednesday could be in London rather than Paris.

It is widely believed that PM Theresa May will put her Withdrawal Deal to a third and final vote in the House of Commons in the hope that MPs finally give their backing.

However May will only hold the vote if she believes she can win, which would require a lot of MPs to change their minds given that she lost by 149 votes in the 2nd Commons vote on her deal. Macron will be in Brussels on Thursday for what will probably be the last European summit with Britain present.

Thursday marks the beginning of the design biennial in Saint Etienne in east-central France. There is a full programme of design-related events lasting right up until April 22nd.

Banlieue Blues jazz festival, various locations March 22nd – April 19th
Plenty of Parisians are guilty of rarely venturing out of the city centre but this jazz festival could be the event to tempt them into the suburbs.
With concerts in different venues across the Parisian suburbs; and everything from big bands to solo artists, it's suitable for jazz fanatics and music fans in general. A standard pass is €20.
Saturday March 23rd

Again, this event might not be taking place in France but it will affect many people who live here.

On Saturday, a march for a second Brexit referendum is being held in London. Saturday also marks one year since the terrorist attack in Trebes near Carcassonne in southern France, with the town holding a day of tribute for the victims.

Tutankhamun exhibition, La Villette, Paris, March 23rd – September 15th
‘Tutankhamun, the treasure of the Pharaoh', is the first stop of a touring exhibition in partnership with the Grand Egyptian Museum, which is due to open in Egypt 2022. In total, 150 objects that were discovered in 1922 in the most famous Egyptian pharaoh's tomb will be on show, many of which have never left Egypt before. The exhibition will also include some masterpieces from the Louvre.

On Sunday March 24th (and Saturday March 23rd), you can visit the Quai Branly Museum in Paris for free.
The museum features the indigenous art and cultures of Africa, Asia, Oceania, and the Americas.