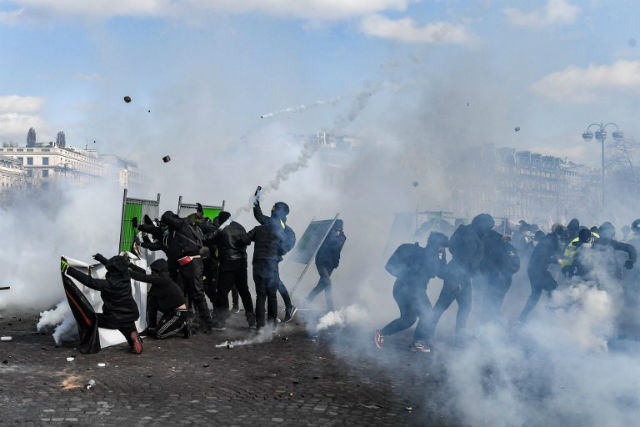 Yellow Vest protesters shelter from tear gas behind a barricade. Photo: Zakaria Abdelkafi/AFP
To set fire to a bank branch without a care for people living in the flats above is not an act of civil disobedience. It’s an act of civil war.
I wrote something similar after the Gilets Jaunes violence which exploded in Paris on 1 December, the day the Arc de Triomphe was vandalised. I was in the midst of the violence on both days.
Last Saturday, March 16, was arguably worse than 1 December. It was more planned. It was more systematically destructive. It was more life-threatening.
A mother and a nine months old baby had to be rescued by fire-fighters from the blazing bank branch on Avenue Frankin D. Roosevelt.
Almost all the shops and restaurants on both sides of the Champs Elysées were vandalised or looted. The celebrated Fouquets restaurant was smashed up and its red and gold awning set alight. Windows, tables and chairs were smashed in the Fouquet's restaurant. Photo: Thomas Samson/AFP
I believe, nonetheless, that the events of 1 December were, finally, more disturbing than the events of March 16. Last Saturday was not a new beginning. It was the last big hoorah of the “jusqau’boutistes” (bitter-enders) in the Yellow Vest movement and their ultra-left and anarchist allies.
READ ALSO:
December 1 was spontaneous. It seemed to foretell a prolonged and violent grass-roots rebellion which might threaten France’s democratic institutions.
That rebellion is now shrivelling at its grass-roots. The turnout for the Gilets Jaunes “Saturdays Only putsches across France is much reduced – only 32,300 on Saturday, compared to 244,000 on Nov 17 and 150,000 on 1 December.
Last Saturday’s events had been planned for many weeks by Gilets Jaunes leaders and by ultra-left groups in France and beyond to mark the fourth month of the movement and the end of Emanuel Macron’s rival Great Debate.
The most militant groups of Yellow Vests from all over France came to Paris to try to prove that the Yellow Vests were still alive. I met or overheard protesters from Toulouse, Bordeaux, Lorraine, the Ardennes and Lille. More peaceful Gilets Jaunes were absent or taking part in a much larger, peaceful march for action against climate change on the other side of town.
The crowds on the Champs Elysées was joined by so-called Black Bloc, ultra-left and anarchist, activists from all over the country – and beyond. According to French security sources, they were strengthened by ultra-leftists from other European countries.
One in three of all Gilet Jaunes protesters in France on Saturday – 10,000 – were in Paris, including 1,500 from the “Black Blocs”, according to government figures.  Two of the most publicised and supposedly peaceful Gilets Jaunes leaders, Eric Drouet and Maxime Nicolle, had encouraged violence beforehand by saying that they were “no longer appealing for pacifism”.
It is unlikely that such a big effort can be made again soon – if ever. The Gilets Jaunes movement is not going away easily but it is not going anywhere much. The movement has been undermined by its own tribal divisions and racist and violent excesses and weakened by Macron’s Great Debate and €10bn of concessions to the low-paid. Saturday’s extreme violence will, I believe, damage rather than re-ignite support for the Gilets Jaunes.
The rural and outer-provincial anger is still there but belief that the Yellow Vests can change everything has evaporated. The notion that the movement – never huge – could impose bottom-up government on the Paris “elites” was always far-fetched.
Some cling to this illusion, under the spell of the propaganda of Gilets Jaunes internet sites. They are not necessarily the poorest, or the most “suffering” people in Peripheral France. They are the most violent or the most ready to justify or glory in the violence of others.
It was obvious from the first minute on Saturday that the mood, and cast of demonstrators, was different from the relatively benign protests of recent weeks. There were fewer women. There were scores of young men in black.
It was also obvious that the recent series of peaceful yellow vest marches, with violence confined to the fringes and the end of the day, had misled the authorities and business owners. The police presence was lighter. Very few shops on the Champs Elysées were boarded up, as they had been in late December or January.
The squads of young men began to assault the police lines just after 10am. The majority of “ordinary” Gilets Jaunes watched and cheered. Some joined in. There was a series of bizarre battles in Etoile, as groups of ultra-leftists and Gilets Jaunes attacked the circle of gendarmes defending the Arc de Triomphe.
At around 1pm, a phalanx of the young men broke away from the battle and invaded a Champs Elysées by then stripped of police defences. They smashed shops and restaurants and set newspaper kiosks alight. Some of them marched as far as the Avenue Franklin D. Roosevelt where they set fire to a bank branch. Eleven people had to be rescued from flats above.
How are we to be sure these were ultra-left, rather than ultra- right thugs? It is often difficult to tell but all the tags scrawled on the Champs (“Pillage = Justice Sociale”) were priggish-leftist, rather than priggish-rightist. Several of them were inscribed in beautiful joined-up writing – a strange tribute to the French education system. None of the “ordinary” Gilets Jaunes that I met or saw showed any disapproval of what was going on. Many justified it. Others joined in.
There were disgraceful scenes of looting and pillaging. One newspaper kiosk, partially burned, was surrounded by provincial, middle aged and older Gilets Jaunes who stole sweets, souvenirs and post-cards.
Renters of kiosks in Paris are not wealthy people. This was not an attack on the “elite”. It was an attack on someone else who is struggling to make a living.
What should the government do now? Macron has spoken of taking strong action to prevent more violence next weekend. Some opposition figures suggest that he should “ban demonstrations”. This is foolish. People who smash and burn shops and banks will not respect a ban on demonstrations.
The police tactics and numbers need to be re-visited. Shops, sadly, should board up again. Otherwise, the government would be best advised to do nothing much and allow what remains of the Gilets Jaunes movement to be destroyed by its own self-defeating hatred and violence.
Follow @john_lichfield on Twitter